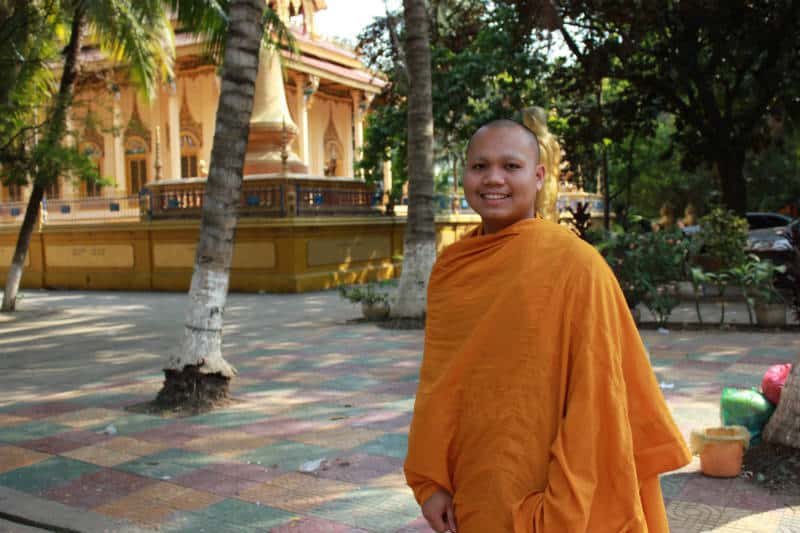 Let’s be honest, most of your travel albums from South East Asia will be littered with pictures of monks. Their orange garments, yellow umbrellas, and dawn/dusk processions definitely make for some picturesque photo opportunities – but there is so much more to a monk’s life than being a model for your lens.

Suong is a monk at Wat Piphetthearam in Battambang and came to the pagoda when he was just a young boy. “I became a monk when I was a child and at the time my mother asked me, do you want to become a monk? I asked her that if I go the pagoda can I study, and she said yes why not! My mother said f want to go to the pagoda then you can study with the monks and if you stay with me then you cannot study. When I lived with my mother we had to do a lot of work to help my mother and earn money rather than go to school. If you live in the pagoda though you can just study everything with the monks, we also get food and somewhere to live which is really good.”

Many young boys choose to become monks because they are living in similar situations to Suong. Often times children come to the pagoda because their parents have passed away and they cannot live with their siblings, find food or support themselves. The pagoda and community within is a refuge for these young people without the same stigma which might come with receiving help from other organisations.

The other main reason why people choose to become monks is because they have followed their parents into the brotherhood or want to learn more about Buddhism. “They think that the Buddhism is very good for them. The theory helps to clean the mind and bring peace.”

The pagoda, and becoming a monk, provides people with many opportunities that they might otherwise not have. “In the pagoda you have a lot of opportunities. You can study Buddhism and you can also study outside. Some schools are free-of-charge for the monks and so they have the chance to study.”

When people have children young in Cambodia they often have to stop their studies so they can work to support their child. Once they are at a stage when they can study again they are years older than the other students at the same level as them. “They feel really embarrassed and ashamed and they don’t want to study with the younger children – so they can come and study in the pagoda without judgement. We teach children, adults, elderly… anyone who wants to learn.”

“There are a lot of rules and things you must do if you live as a monk.”

Buddhist monks in Cambodian live in wats, which contain residences and a hall for eating and for classes. They live a regulated lifestyle in the wats: there are no fewer than 227 rules to observe! Eating after midday, sleeping on a too-comfortable bed, participating in entertainments such as dancing or watching movies and handling money are all forbidden. Monks are also not supposed to participate in politics, though this has changed over time; since the 1980s some Buddhist monks in Cambodia have taken active role in politics.

Monks perform ceremonies at occasions such as births, deaths and weddings, and more broadly they play a role in ministering to the people’s social and emotional needs, just like in other religions. In the mornings, monks leave the temple and walk the streets for alms-giving. People stop the monks and give them gifts of food, and the monks give them a blessing in return.

“The blessings that you see happen with the water is actually not the rule of Buddhism but comes from Hinduism. You know the Buddhism and Hinduism in Cambodia is mixed together.”

A bit of Cambodian Buddhism history:

Before Cambodia was called Cambodia, it was (from 100 BCE to 500 CE) part of the Funan Kingdom. Funan was ‘Indianized’, which means that it was heavily influenced by India and by Indian culture. Consequently the Funan Kingdom was Hindu, but with Buddhism as a secondary religion. Buddhism in Cambodian religion seems to have begun to become more popular and influential from around 450 CE.

Buddhism in Cambodia flourished during the Angkor Kingdom period, particularly during the reign of the Buddhist Khmer king Jayavarman VII. Jayavarman VII ruled between 1181 and 1215, and worked very hard during this time to establish Buddhism as the state religion. He saw this as saving the Khmer people. Jayavarman was successful, and after the 13th century CE Theravada Buddhism (one of the oldest Buddhist schools) become one of the religions of Angkor Wat.

Massive damage was done to Cambodian Buddhism during the Khmer Rouge regime between 1975 and 1979. Buddhist monks were forcibly removed from the wats (Buddhist temples) and made to do manual work (as were many other parts of the population). Religion was forbidden and temples were damaged or destroyed. It’s estimated that as many as 50,000 monks died or were killed during this time.

Today Buddhism remains an influential force in Cambodia religion and in everyday life, but it is still rebuilding from the loss of so many leaders and teachers during the Khmer Rouge period. However, in 2006 there were an estimated 60,000 Buddhist novices in Cambodia, and work to repair temples and re-establish Buddhism continues.

Back to the photos – Suong says that he has a lot of tourists taking his photo on the streets or at the pagoda. “I don’t mind it actually but some other monks don’t like it. I think it’s good because people are interested in Buddhism because they come from countries where there is no Buddhism religion. These people can take my photo and then share it with their friends and family and it makes me happy to think they might be seeing something they’ve never seen before.”

He does say though, that he’d prefer tourists to ask him first before taking his photo… why not try it next time you want to photograph a monk?

Find out more about the history of circus in Cambodia 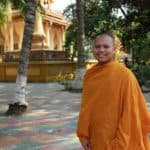 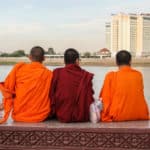 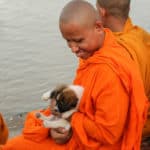