The Giant Puppet Parade (GPP) is an annual event, in its 9th year, which is so much more than walk through the town with large, lit-up, puppets.

Children under 15 make up one third of Cambodia’s entire population and every year The GPP offers over 600 underprivileged children in Siem Reap the opportunity to face and explore the poignant issues they face through a fun artistic medium. The things they touch on are; poverty, education, health and environment… all things that need to be looked at in order to secure the sustainable growth of the country.

It’s grown to be the largest local community arts project for children in the country and this year the workshops are being entirely driven by art students from Phare Ponleu Selpak (PPSA) – our mother NGO.

2015 is the first year since its inception that Artistic Director, Jig Cochrane, will not return to Siem Reap to run the workshops, therefore all workshops will be run entirely by 14 student artists from PPSA.   “It’s a very exciting year for the project”, said Stuart Cochlin, Project Director for GPP. “This is exactly where we are supposed to be. Jig has been an instrumental part of GPP but it is time to hand over the reigns. Last year Jig took on more of a consultancy role, supporting from the background rather than leading workshops. He let the Battambang Artists take the lead and was hugely impressed with the results.”

The project this year started on 7th February, with a team of artists and volunteers holding the first workshop in the picturesque gardens of Wat Damnak Pagoda with young landmine survivors from the Cambodian Landmine Museum Relief Fund working alongside local expat children from nearby international schools.

“All puppets are created to include unique educational, cultural or ecological themes such as road safety, endangered species, hygiene, local cultural appreciation and environmental awareness. Each puppet takes an average of two days to complete and will vary in size from ten to fifteen meters”

The climactic finale of the Giant Puppet Project, is a dramatic parade through the streets of Siem Reap Town on the 21st of February. In the ancient style of Chinese dragon puppets, each organisation proudly exhibits their creation. The children are applauded and cheered for the duration of the parade by an enormous and annually growing crowd of onlookers from the local communities as well as host of international tourists.   “The Giant Puppet Parade in Siem Reap is the biggest event in ABCs and Rice’s calendar year”, says Tammy Durand, Director of ABCs and Rice, two NGO’s involved in the parade. “It builds their self-worth because the puppet is actually made by them. It’s wonderful to see the children in a setting outside of school where they work as a team. They have so much fun during the parade, marching with everyone and showing off their puppet.”

The parade begins in the Old Market area of Siem Reap at 7pm and marches through the old town before snaking its way along the river road to the Royal Independence Gardens, opposite Raffles Grand Hotel d’Angkor. Once the parade reaches its destination, entertainment is put on for the children’s amusement – including a performance by Phare, The Cambodian Circus.

We’ll see you there!

Have your own circus workshop with the Phare circus artists… 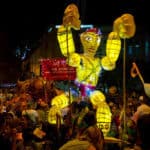 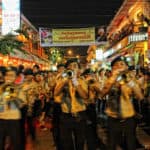 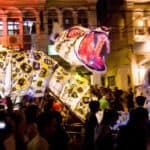 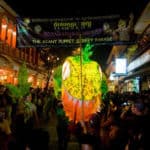 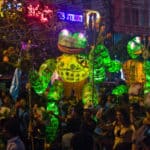 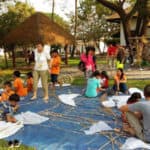 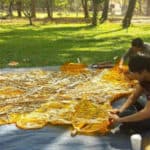 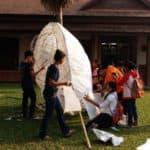 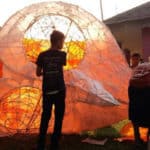 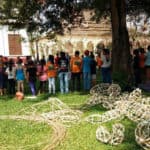 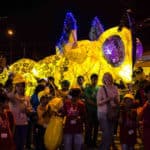 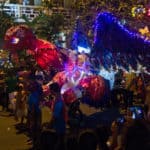