Tini Tinou: What is Contemporary Circus? 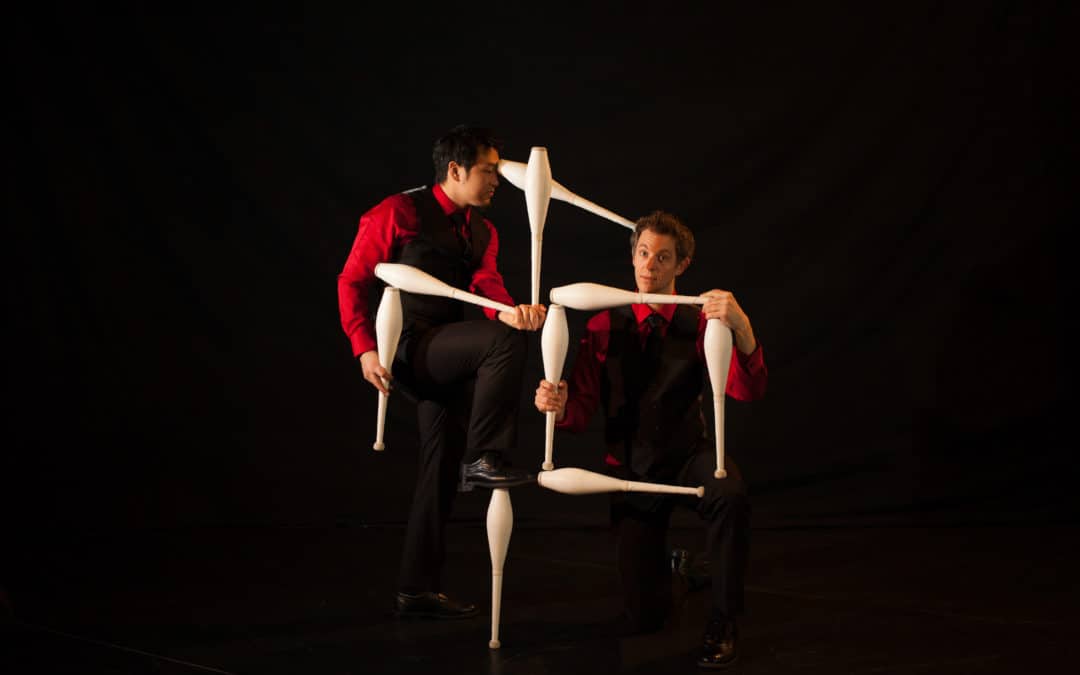 Tini Tinou: What is Contemporary Circus?

Circus has come a long way since the days of balancing elephants and taming lions. While many people still think of circus in the traditional sense, circus has transformed from its roots in showmanship and variety shows, to a theatrical spectacle which can tell a story, convey emotions, and entertain audiences with high level acrobatics – no animals needed. ‘”Influence” by Phare, The Cambodian Circus is a contemporary mix of circus, puppetry and theatre. (Photo: Scott Sharick)

Thanks in large part to well-known circus companies like Cirque du Soleil, the circus arts have changed and evolved, and in many cases today going to see a circus show will seem closer to a theatre production. Music, makeup, costuming, props and dialogue can all be used to take the audience on a journey, with many circus performers playing characters, and their acts being incorporated into a larger story or theme throughout the show. In addition to the development of storylines and characters, the skills performed on stage are becoming increasingly difficult and sophisticated. Where the circus used to only entertain and was often aimed at children, circus is now used to challenge, teach, and inspire audiences, young and old. By Sebastiaan ter Burg from Utrecht, The Netherlands (Elephant at Circus Maximum) [CC BY 2.0 (httpcreativecommons.orglicensesby2.0)], via Wikimedia Commons

While the traditional idea of circus in the western world may involve performing animals and sequined costumes, the history of circus dates back centuries in different countries and cultures around the world. As former circus performer and co-founder of the San Francisco School for Circus Arts, Judi Finelli says,“There are depictions of circus artists in frescos, mosaics, jars and urns, as well as on cave paintings from the antiquity. The earliest images of jugglers that exist are in the tombs of the Beni Hasan necropolis from 4,000 years ago in ancient Egypt. Chinese records indicate that acrobatic shows might have taken place 5,000 years ago when its civilization ceased hunting and gathering and transitioned into an agrarian age. People had more time to pursue such performing arts. Acrobatics in Africa is thought to be at least that old, although there have been few scholarly studies of African acrobatics and stilt-walking in English.” The ancient Romans held chariot races, gladiator battles, and other forms of entertainment in an arena called a “circus”, a word derived from the Latin word circenses, meaning circle. This is where the modern term for the circus, and the circular stage where the performances take place, get their name from. After the Roman Empire fell, performers were forced to travel around Europe to find audiences to perform for. The travelling circus was born out of these performers deciding it was easier to change location to get a new audience than it was to change their acts for the same audience. In Cambodia, there is evidence of circus performers dating back to pre-Angkorian times. Carvings on stone temples in Angkor Wat and smaller, even older temples in Kompong Thom Province depict several circus disciplines. Cambodia also has the tradition of the “pahi”, travelling troupes who performed acrobatics and juggling, often with performing monkeys, visiting villages around the country to entertain and sell traditional medicines to audiences.

The style of circus performed by Phare, The Cambodian Circus is a unique mix of contemporary “new” circus ideas, combined with traditional Cambodian music and stories. The Tini Tinou International Circus Festival gives audiences a chance to experience not only Cambodian contemporary circus, but contemporary circus troupes and performances from a range of countries and cultures. Collectif Open Ticket from France will perform at this year’s festival.

This year’s festival includes shows by artists from Australia, France, and Canada, all countries with thriving contemporary circus scenes. All three troupes are from youth circus schools, including the Flying Fruit Fly Circus, Australia’s national youth circus, Centre National des Arts du Cirque in France, and the Vancouver Circus School in Canada. The “new” circus style has meant that younger generations can get involved with the circus and start developing their skills early in life, as the focus is on human abilities, and no longer requires animals and a travelling big top. This move towards circus being more accessible to get involved with, instead of just entertained by, has helped to modernize the circus art form with new performers and bring the circus to new audiences.

The Tini Tinou International Circus Festival is proud to support the development of the contemporary circus movement both for Cambodians and international artists, and is excited to create a circus experience that will inspire and astound audiences!

To find out more about show times and tickets to this year’s festival, please check the Tini Tinou 2016 festival page for more details.