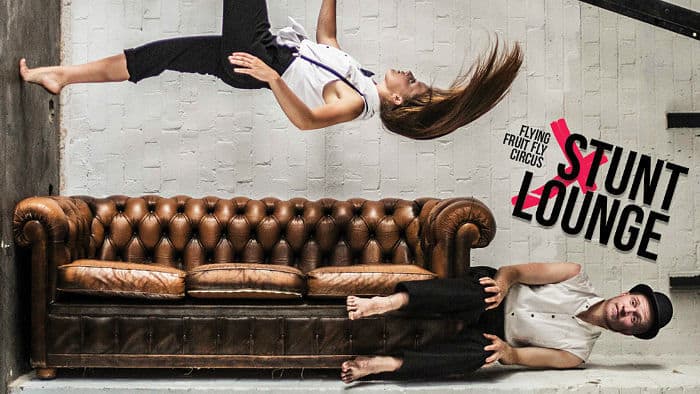 Circus artists from five countries will perform at the Tini Tinou International Circus Festival from April 28-May 10 in Phnom Penh, Battambang and Siem Reap. This year we’re excited to host the world-renowned Flying Fruit Fly Circus, Australia’s national youth circus, only full-time circus school for youth, and Circus-in-Residence at the Sydney Opera House.

The Flying Fruit Fly Circus performs April 28 in Phnom Penh, May 4 in Battambang, and May 9 in Siem Reap. Check the program for more information.

Four talented new graduates from the Flying Fruit Fly school based in Albury-Wodonga on the Victoria/New South Wales border, have created a new show called Stunt Lounge, directed by Fruit Fly alumni Darcy Grant. This contemporary circus show explores the risks that young people take on their journey from child to adult, and features jaw-dropping stunts in a mix of circus and physical theatre.

Stunt Lounge is currently touring in Australia, playing at the Melbourne International Comedy Festival and the Sydney Opera House, and soon to be seen for the first time in Cambodia! We asked performers Zach, AJ, Jess, and Jackson a few questions about their circus careers and what’s in store for their trip to Cambodia for Tini Tinou.

How did you get involved in the circus?

Zach: I first got involved with circus when I was 9 when I started fire twirling, and a year after that I started the Flying Fruit Fly Circus community program. AJ: Back in 2007 I had a friend who was in the circus. He mentioned it to me and suggested that I try it! So I applied for Circus Arts community classes that year and was accepted into the school in the year 2008. Jess: I started circus in Western Australia when I was 5, which then led to me joining the Flying Fruit Fly Circus at 16. I joined at a young age to gain some after school fitness and friends which quickly turned into a passion. I now pursue performing arts as a career. Jackson: I got involved in the circus through my old school. It felt like circus picked me when I joined!

What are you most looking forward to during the Tini Tinou International Circus Festival?

Zach: I’m looking forward to experiencing the culture of Cambodia and meeting, learning from and performing with all the other artists. AJ: I am looking forward to performing in another country to experience a different crowd, whilst being around other circus performers. Jess: Meeting like-minded performers and experiencing the culture of Cambodia! Jackson: Meeting more performers and checking out other shows!

Have you ever been to Cambodia before?

Zach: I’ve never been to Cambodia!

AJ: I have never been to Cambodia before so I am excited to experience it.

Jess: No, but I lived in Thailand when I was younger.

Jackson: No, I haven’t been to that festival or country before!

What other countries have you toured in?

Zach: I have toured with the Fruit Flies in Istanbul, Turkey and have trained and visited circus schools in France, Spain and England.

Jess: I have toured extensively throughout Australia, while also travelling through Germany, Holland, France and Spain on a solo skills development earlier this year

Jackson: I’ve toured over to Istanbul in Turkey.

What can audiences look forward to when they come to see your show “Stunt Lounge”?

Zach: I think audiences can look forward to a high skill show, with interesting and different approaches to circus performance.

Jess: Stunt Lounge is a raw and unique insight into the lives of young people today. At times it can be confronting, heart-warming and hilarious, so I hope the audience can experience the “risk” of being a young person in a such a fast moving society, from the comfort of their own seats.

Jackson: What fun you can have with a couch!