The man behind the posters – Chin Borey 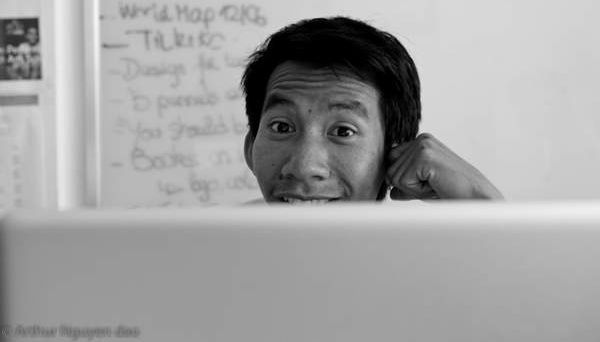 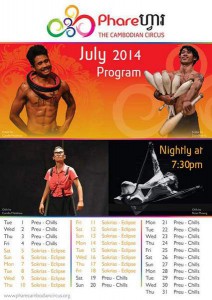 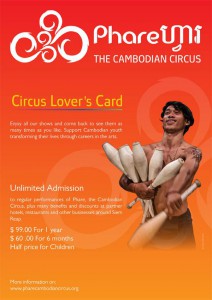 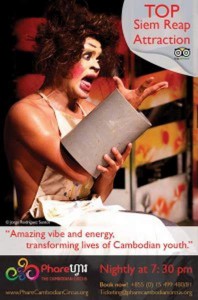 Whether you came to Cambodia, whether you are planning your trip to Siem Reap or whether you follow us on the social media, you have seen dozens of posters and banners displaying the colors of Phare.
But have you ever wondered who is creating those colorful, dynamic and appealing designs? Who do you think is the man behind the computer?
Meet Chin Borey, 27 years old, Graphic Designer at Phare Performing Social Enterprise. 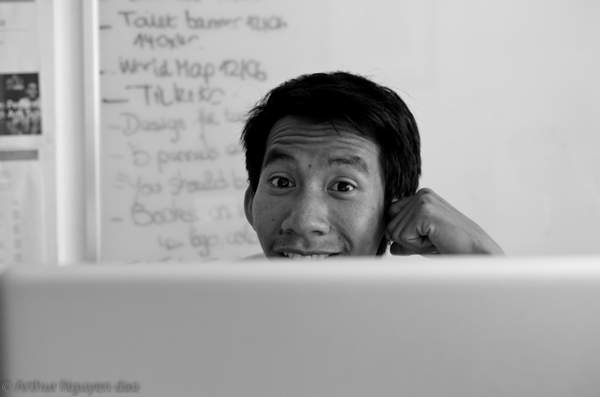 Borey’s involvement with Phare started a long time ago. His father was killed when he was young and it became increasingly hard for his mother to have her children educated. Still, she spent a lot of money to find an NGO that would provide for education. Facing great difficulties, his mother sent Borey to Thailand but he was deported back to Cambodia because he had no passport. “It was my lucky day”, he says. Shortly after, he was found by an NGO giving educational programs: Phare Ponleu Selpak.
However, the way to being a graphic designer was not meant to be straight forward. Indeed, “I just wanted to travel with the pickup of the NGO which was coming to take the kids to Phare every Thursday”, he remembers. He was 16, and at the time, he did not know there was a visual art school there, so he started learning circus skills for a few weeks. One day, he saw painters and felt extremely touched by their art, so he changed to the visual art school of Phare because he had the feeling he could draw anything that would come to his mind. “Then I saw a conference on the history of arts and that’s how I understood I could do great things for my country through the emotion of art”.
Rapidly, his creations got successful, winning the first price in a few contests, especially one jointly organized by Phare and UNICEF: a house was being built for young and talented children who lived far away from the school. That is how he got to live close to Phare Ponleu Selpak. 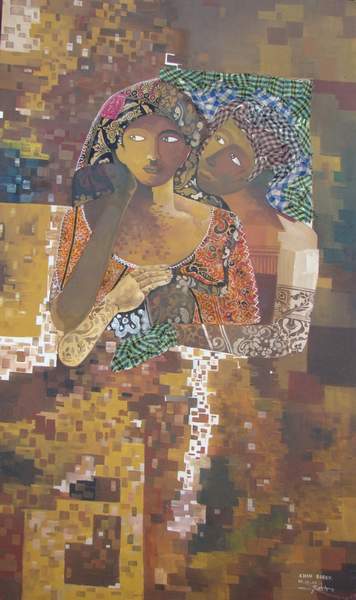 He even has a painting that echoes the Khmer Rouge era which is exhibited in the Bophana Center in Phnom Penh. A strong painting envisaging art as a way to prove that creation can provide for a certain understanding of the most terrible historical events. If this early creation was a way to delve into his country’s history, the influence of other artists in his late production is more visible.
Where does his inspiration come from?
Borey’s favorite artists are Klimt, Pollock, and Picasso, and one can easily see this influence in his art production. But above all, one artist has had a great influence on him: Vann Nath. According to Borey, the man is what an artist should be: a talented person who shares his skills and thinks about the others. “The ideas and feelings he transmits are simply amazing, and he refuses to make a business out of his paintings. He told me he would ideally open a big hospital and work for free for poor people.” Meeting Vann Nath has clearly been a major milestone in young Borey’s life. 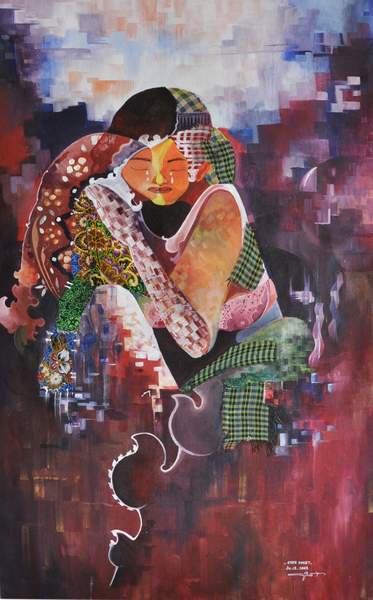 After graduating from Phare Ponleu Selpak’s both Visual Arts and Graphic Design Schools at the age of 23, he worked in various places. Notably, he worked in China on a 3D character design project, followed by an artist position at Artisans d’Angkor where he developed his artistic skills and also learnt new ones, such as lacquer paint. “A dream job”, he says with a large smile.
However, he never really cut off his relationship with Phare as he always did occasional missions for the circus in Siem Reap, or the school in Battambang. This eventually led to a full-time graphic designer position in Phare Performing Social Enterprise. As he explains, “it is important for me to be able to have a positive sociale impact when I work, I want to contribute to my country’s reconstruction and development. I could earn much more money in big private companies, but it is not enough. Money is for sharing. “
With a stunning art production, diverse professional experience and great artistic and language skills, the man is undeniably uniquely Cambodian and daringly successful.
He always keeps in mind a sentence he once heard: “true inside, beautiful outside”. Such motto is a guide for him, as he cares about having his appearance and his feelings in harmony.
Now, Borey has less time to express his creativity as he works a lot to always provide for new graphics to advertise and communicate for the circus, which is actually his favorite part of the jobs: layout, flyer and poster designs.
A dream? Of course: having his own graphic design studio. “When I walk in the streets in Siem Reap, I see all the logos and designs of the big companies and I think they could look much nicer. I would like to have a lead graphic design studio to show those entities my vision and prove the world that Cambodia has great graphic designers. “
His future certainly holds a lot of surprises for him. 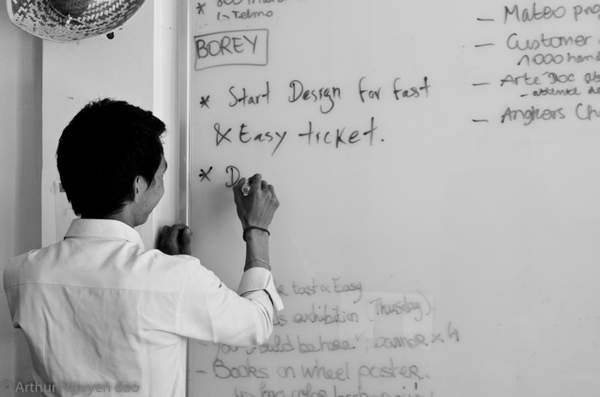 Want to meet other success stories like Borey’s ? Then you have one thing to do: come and say hello at the show in Siem Reap at 8:00PM !