One of the stars of the Adventure, Ratha, talks to the Siem Reap Post  – he has a dream – to see generation 20 and 30, and he will go to any lengths to make it happen … 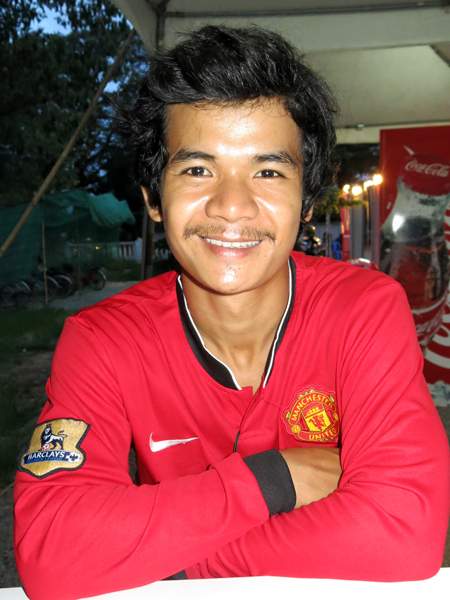 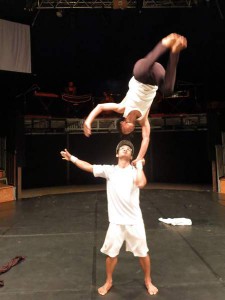 “The Adventure” has started its second run at Phare. It’s on now for 2 another days, and then comes back at the end of the month.

We are delighted to bring you Ratha’s story. Ratha is 23, and one of the stars in The Adventure at the circus. Of course all the performers are stars, so that’s not hard.

I met him on a rainy evening outside their tent. Because Ratha doesn’t speak English (or French), Xavier translated for him. Here’s what we talked about.

Q. Hi Ratha. Can you tell me a little about your life when you were young.

R. I was born in Takeo Province in the South of Cambodia and lived there until I was 13. There were 9 children in my family, and we all lived in a small house. It was a hard life, very difficult to bear. At the age of 13 we moved to Battambang Province. My father was a driver who took logs round on a trailer behind a moto. He was also a farmer. At Battambang he worked as a porter in a market. My mother’s mother had some land in Battambang, and she divided it up between all her children. My mother got some and we managed to build a small house out of corrugated iron. It turned out the house was very close to the Phare Association.

Q. How did you come to join Phare?

R. This was really hard. I didn’t know anyone there. Eventually I dared to go in. They invited me to join, and that was very good. I started public school and they put me in Grade 5. I had never been to school before and Grade 5 is for 10 year olds. Remember I was 14. It was very hard, but slowly I made progress.

Q. You obviously liked it there. Do you remember your first show? 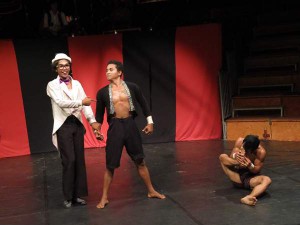 Q. Have you been abroad with Phare?

R. I went with the show tour in 2012. We went to Germany and Denmark. We performed to groups of kids at schools etc. All the performances were for young audiences.

Q. You’re going to be in Siem Reap for three months. What do you see your future after that?

R. I love performing in the circus. It is very important in my life. At the moment it is really helping me by giving me money to send home to my family. Obviously I want to carry on performing as long as possible. I also love to teach small kids, and I like to work at the circus school. 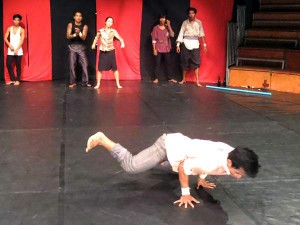 Q. What would be your ideal dream job?

R. I would really love to teach foreign kids abroad. Language is no problem as everything can be taught with body language. If I ever got such a job, then I could in time learn to speak their language. Realistically I don’t see that happening though. I would, however jump at any such opportunity. (Ratha is a great jumper … If any of our readers know of such an opportunity …)

Q. I saw how good you were with the kids at the end of the show. You really seemed to relate to them and you made them laugh too. Now, Generation 8 has just started at the school. Do you think there will be many more? 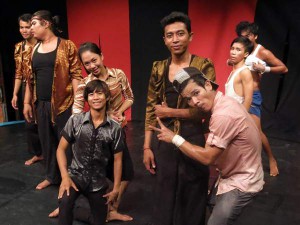 R. I think there will be many more Generations. Maybe we will someday have Generation 20 or 30.

Q. Will this work having so many students.

R. It will work as long as we fight for it. I really want it badly. If the school closes, I will open my own.

Q. We know tourism is growing in Cambodia, and particularly in Siem Reap. Do you think this is good?

R. I think it is really good. More and more people can experience Cambodia. It contributes to the development of Cambodia. It is positive evolution. I don’t feel angry at the tourists, only happy they are coming.

We closed. Ratha had to go to make up for the show. I could have gone on talking to him for ages. I think our interpreter will probably continue this conversation in private sometime. He was fascinated too. Here’s a young man, with a terrible past, who is really looking forward. He has drive and ambition, and a vision for the future. Good luck Ratha and I promise to come and see the opening night of the Generation 20 show. At current rates that will be 45 years from now … I would put a lot of money, Ratha will have been involved with their training.