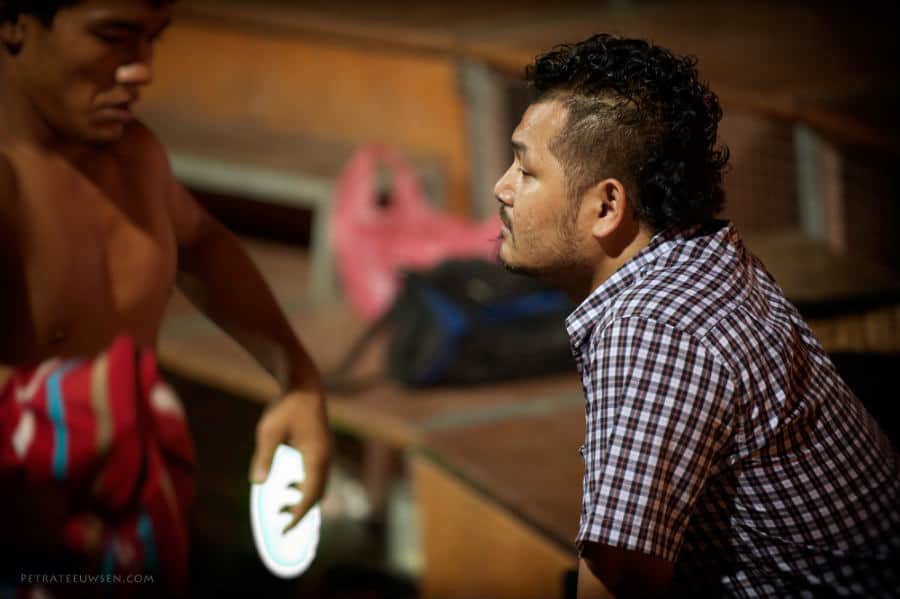 Bonthoeun has a remarkable story. He’s only 26 years old and he’s already the Artistic Manager at Phare, The Cambodian Circus – making sure the artists are keeping well and on-top-of-their-game and that the show is at 110% for all you fans who come to watch them perform.

He came three days in a row and told me about this place and I still didn’t get it. But on the third day with all the make up on his face he began jumping around and doing some tricks which was very astonishing for me.

He wasn’t very good, he was falling around a lot but it was still such an extraordinary thing compared to our daily and repetitive life that I thought; this is really funny, this is really enjoyable, I want to go. And then I went to the circus school and I meet a man called Khuon Det.

What was it like arriving for the first time?

I arrived at this amazing place, not so far from my house which was full of kids, having so much fun.  They were playing some games, doing some acrobatics and really having fun and doing it with a lot of pleasure. At first I just observed because I didn’t dare to participate, what was this place?

And then I saw my cousin having fun and entertaining himself with the children over there. I came every day for 3 days and observed and then eventually I went and approached Khuon Det because I thought; well my cousin can speak to him only with sign language so I should be able to communicate to him with my words.

Det told me that there was no problem, I could join the activities. For me it was really something fantastic because it was not only that you were doing some fun things with the others but also at the end, which was very important for me as a kid, you would get some cakes and some sweets. That was totally unexpected, we’d never had the occasion to have those before so not only would you have fun during the day but at the end you would also have this small reward. 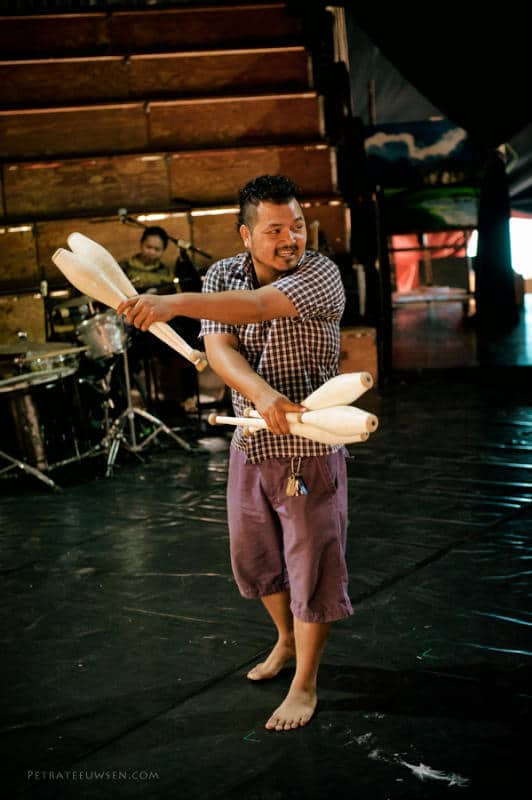 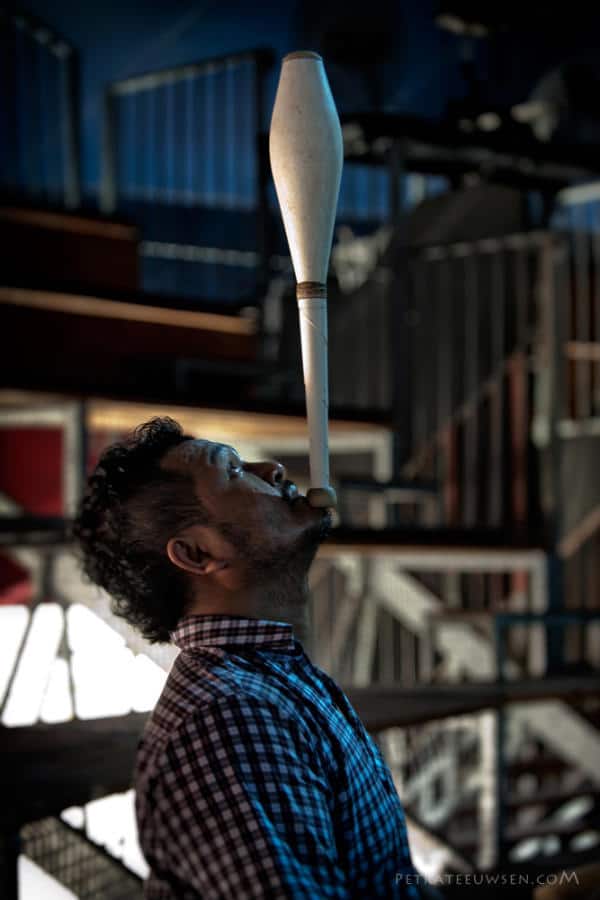 What was your family life like at the time of joining the circus school?

When Mr Det accepted me to join the circus school he insisted to go and see the family situation, so together Mr Det and a social worker called Dalin, a woman came to my home to see what my situation was.

At the beginning I was very upset because my father and my grandmother wouldn’t allow me to go to the circus school as it would take time out from the work I was doing at home… you see I was going to the market regularly to bring some yam root and other vegetables home. The circus would take time away from that so they didn’t agree at first.

My duty when I was going to the market was not to buy these yams, but actually it was to wait for a truck to deposit the bags of vegetables. When this happened sometimes there would be some yams that would fall out and so my duty was to pick them up. It was really collecting the remaining things that would have been thrown away…

It was like slavery at that time because I would sometimes sleep there on the garbage and on the rotten vegetables just to wait for the next truck. People would hit me to get out because I was like a beggar. With some of the owners I would try be an assistant, I would try to help to beg for a little bit of cash. So I felt like I was in a very bad condition at that time.

This is why my father and grandmother didn’t want me to go to circus, because if I wasn’t doing that then it was a loss of income for the family and so I had to struggle, I had to go on my own to the circus and not tell them. I also had to organise schedules with my cousin at that time so when I would go to the circus he would go to the market, and when he would join the circus for one hour and a half then I would go to collect the food and garbage’s. We had to struggle that way… the desire to practice was really so much stronger than all of that though.

How did you get from there to where you re today?

To make a long story short – I joined the circus firstly as an acrobat and then I was in the first show created and after many tours around the world and tours in Cambodia for about 10 years, I became a teacher of circus as well as an artist. I was doing that for about 6 years and then after being a teacher in Battambang Phare, The Cambodian Circus in Siem Reap asked me to become the artist manager here.

What does that mean?

Being the artistic manger means I take care of all the artists, their physical condition, their circus techniques to make sure they are performing at the best quality. I am also in charge of all that concerns the show. I will fix any problems in rhythm during the show, space wise… I will also look after the musical direction, collaborate with the musicians to make sure it fits the show, I will also look after the costumes to see if there are any problems and if there are any costumes that are not according to the story. One part of my work is also to create new shows and new stories.

So as we see it’s everything that revolves around the show itself basically and my main goal, my final goal is to have the audience happy about the experience that they get. 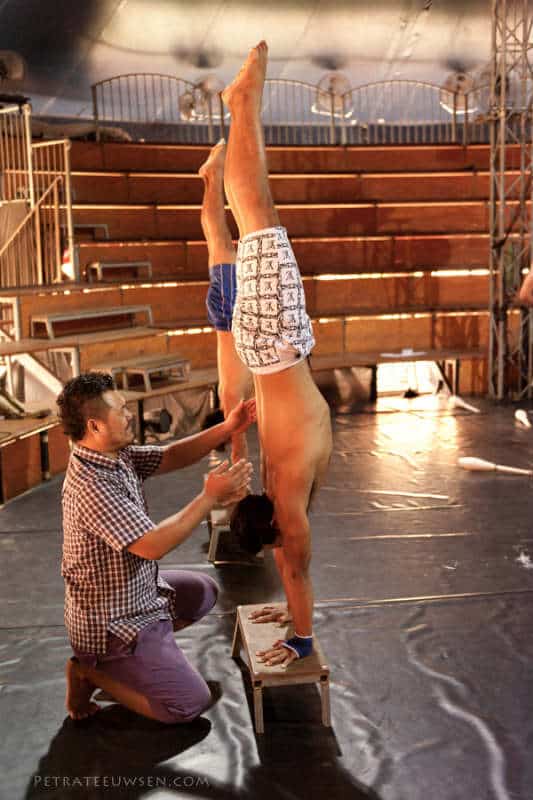 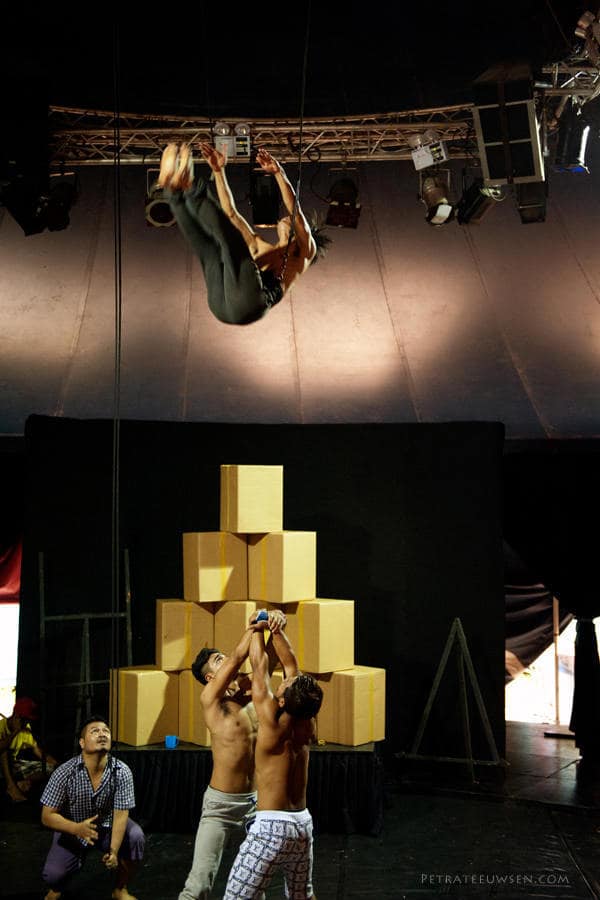 You’ve come an incredibly long way in your 26 years!

Yes, I am very proud of my achievements. When I think about when I was young, struggling on the streets of Battambang, when it was difficult to make ends meet… and now I am at the point where I am an artistic manager – for me it’s a big thing.

I will never forget all that time when Mr Det was so kind and so dedicated to not only me but all the other children at that time.

Who did you move to Siem Reap with?

I came alone to Siem Reap, I don’t have any relatives or family here so it’s a new environment for me. But I do have some friends that I knew from before… then of course there are all those artists that were my students before.

I can say that the circus is my family, I don’t have relatives here in Siem Reap but since I’m little, once I think about it, the circus has become my family even more than the members of my real family. So this helps me not to miss so much what I left behind in Battambang, but then I’m still very happy of course to go now and then to visit them.

What has Phare given you and other students, apart from circus skills?

It brings a strong sense of a responsibility over a group goal. Something about solidarity, something about achievements all together which we need to fulfil.

Professionalism as a general thing, the way you interact with guests and audience members, the way you are confident within yourself enough to be respectful to the people who bring you jobs.

The last thing is it brings us recognition. Recognition towards other Cambodian citizens, showing circus as an activity which is bright, which is brave and which is precious.

Phare also brings us knowledge to adapt ourselves and to find solutions on your own, to reach a certain goal.

What do you want out of this job?

I started this job with really a desire to put something of myself into it, to not being afraid of what the artists will think, what my boss will think. I will take advice from everybody or course, but when I decide something I want it to come from myself and the way I see things to be the truth and the right thing to do.

Before I used to be afraid, is that right, is that wrong? Now I’m thinking, ok I’m going to do it my way and if I’m wrong well then I’ll be wrong and I’ll learn from it. 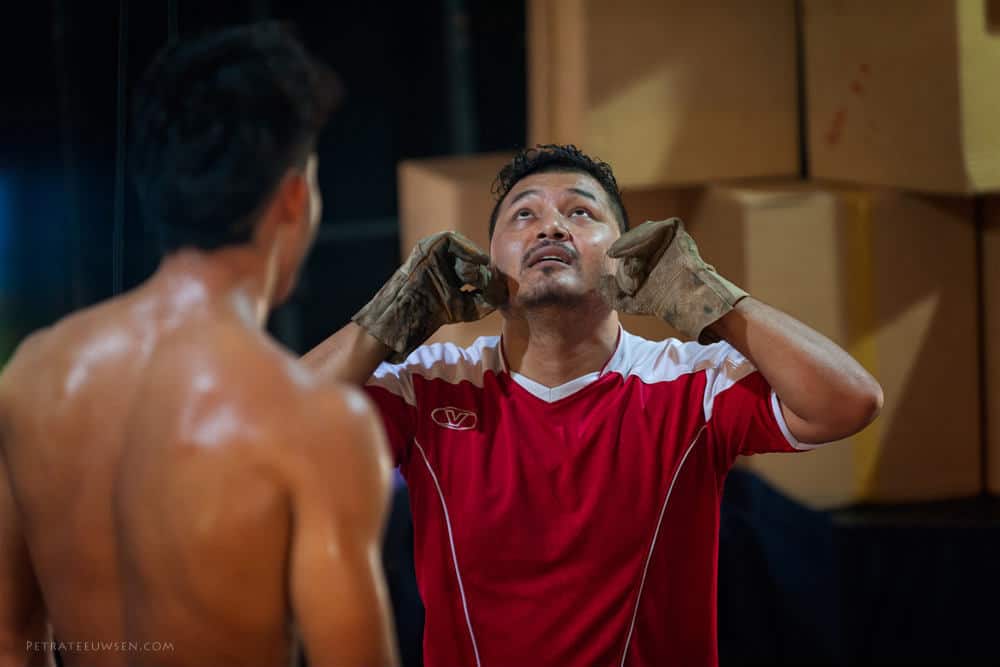 Meet another first generation circus student, Vannara, who is now working with people recovering from addiction with the help of art.

Who is this Mr Khuon Det who has changed so many lives?

Learn about Sokha – the circus show which tells the history of the school which has brought light and hope into so many young Cambodian’s lives.