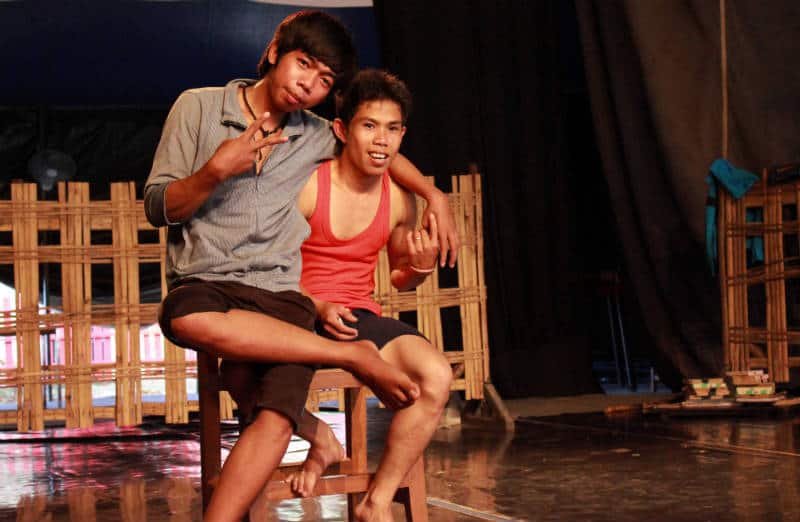 Pitu is a musician for Phare Circus, playing mostly for the show ‘Chills’. He’s talented and enthusiastic – in fact I think he secretly want’s to perform centre stage!

When did you start at Phare?

I started at Phare Ponleu Selpak when I was about 15 or 16. I knew one of the music teachers from the school and he lived in the same village as me. My father is a musician as well and many people who live in my village are musicians as well.

Was that what pushed you to start learning music?

It’s because of my father that I wanted to follow down the music path, I like music as well. At first my mother didn’t want me to learn music… but she eventually let me.

Why did she not want you to learn?

I don’t really know, but at that time when I wanted to start I was a student in a public school and so my mother didn’t want me to go and study music because then I wouldn’t be able to go to public school every day… she thought maybe I could not study well because there were two things to do  – play music and study.

Does she think it more important to go to normal school?

I don’t know about my mother’s thoughts on that, but in my family there is no one who has graduated grade 12. My mother even hasn’t – that’s one reason why she wanted me to study and graduate…

Now I have graduated from grade 12 and I’m playing music! I am the only one in the family who has graduated. My brother stopped studying in grade 10 and my younger sister is also in grade 12, bit hasn’t finished yet.

I feel so happy and proud with myself.

Tell me about your family?

My mother is a seller, she sells general things at a little store and my father is still a musician. They live in Battambang, near the city centre.

When I was young my family got along alright… but once I got a bit older it became more difficult and we were very poor for a while… now it is better though.

Why did it get hard in the middle?

When I was a child my mother sold things close to the train station in Battambang… then the station closed down so no one came to buy from her and she couldn’t sell as much. My mother had to borrow money from many people to survive. Afterwards she had to repay them, but she still had no money so in that time it was very difficult.

Now it’s better. We still owe money to many people but it’s less than before. Me being here in Siem Reap and earning money through playing with the circus is helping my Mum repay those debts.

What do you love most about playing music?

I really enjoy playing traditional music. I want to take care of the Khmer music and I want to share it with the next generation. It’s so important to keep it alive.

Why is it important?

There are so many benefits to sharing your music with others. It’s part of our identity. It’s also really good music, it’s better than modern music I think. Some people say that the modern music is very good but I think that Khmer music is better.

What do you do in your spare time?

I like to read books and learn different languages… especially English. I am learning by reading on the internet by myself.

Why do you want to learn English?

Sometimes I want to be able to communicate with foreign people… but it’s hard if I can’t speak the language.

Are you going overseas next year with chills?

Yes… I’ve been to Japan, Laos and next year I will go to France! Without Phare I would not have had the opportunity to travel.

I feel very happy and proud that I am able to travel. Some of the rich people in Cambodia don’t even travel, but I am a poor guy and I can!

The first time on the plane I was so scared and nervous… I was very surprised when in Japan, it’s so different to Cambodia!

If you were an animal what would you be and why?

Probably a dove bird – the white bird that is on the sign for freedom and peace. Many people love that bird and not many people eat that bird so I would be safe!

Do you have anyone who inspires you?

My mother – when I do something she always encourages me and pushes me. I also want to be like Vanthan (another musician who plays for Phare), he is an amazing musician and I really look up to him.

What is your dream for the future?

I want to be a musician that can earn not a lot of money, but enough to provide for my family.

Who is this Vanthan? Read his story and see just why the other musicians look up to him so much!

Check out the synopsis and story behind Chills.

The show Chills is heading overseas for a French Tour next year… see what needs to be done to prepare for such a journey! 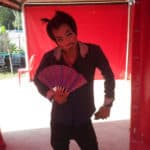 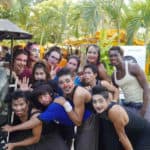 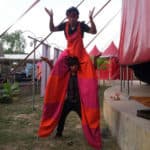 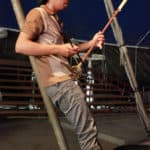