Talking with the artists today as they had just finished rehearsing,
we got a more personal understanding of Phare’s piece known as Khmer Metal…

Performers Corner: What does Khmer Metal mean to you as an artist?
Interview by By Brian Meyer with translation by performer Phounam Pin
February 18, 2014 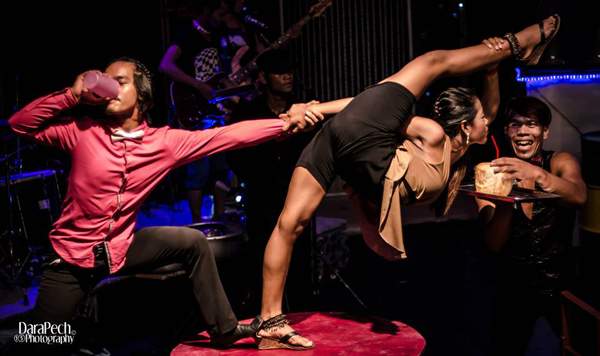 Phounam:
“Khmer Metal has been a dangerous venture for me.  As a contortionist, this show has been a departure from my normal skill set as I do a number of aerial stunts.  This excitement has matched the risqué themes of the performance. The show has also felt like the turning point in my dream to take my abilities to the next level and travel the world as an artist.”

Brendy:
“Its about the complexities of life in a particular bar scene and all of the drama that comes with it… My role as the “bar owner” has actually helped grow my leadership skills as if I actually owned a bar! The role has also made sense for me as our group leader and has helped me in keeping our crew together.” 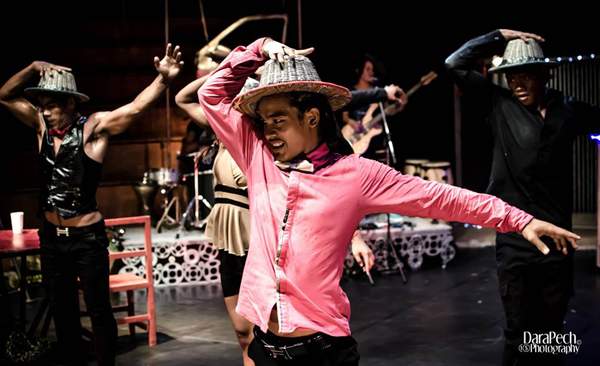 Samol:
“Working on Khmer Metal has been a long journey – we artists don’t always get along when we work – and creating this show has been a labor of love.  This fits with the show’s theme; it’s about the real world in Cambodia as seen through life at a watering hole in Phnom Penh. As the bar’s bouncer who drinks his own share, I can relate to my character’s struggles with an impatient work-world that gives you grief for moving slow on the job… I’m a beer lover myself!”

Chandann:
“For me, the show has meant challenging new techniques and hard work – and this has brought big payoffs with improved skills in a number of areas. In many ways the show has been a maturing experience – I feel like I’ve finally grown up! With his realization I’ve also come to understand that there will always be more to learn in the future.” 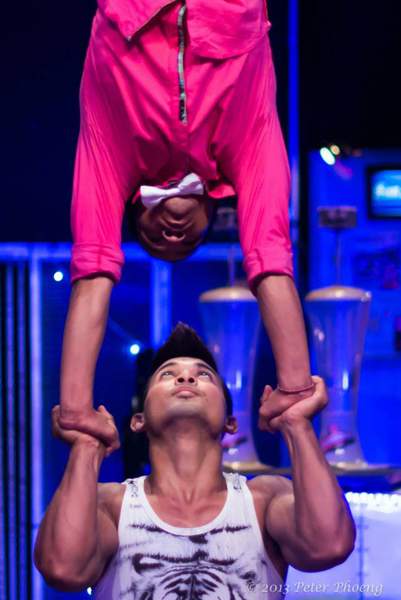 Sothea:
“I’ve loved being a part of the show because it’s themes are hard for many Khmer people to accept because it does not represent traditional norms… it’s a modern piece, showing that there are new problems for a     new generation to face and solve together. For me its a show about the truth of what is happening today in Cambodia and I’m glad we’re delivering the message publically in such a humorous style.”

Samnang:
“I love the group and the show and want to work on the performance even more, make it even sharper. I’m grateful for the challenges the show has brought up between me and the other members because my skills have increased as a result – making me stronger.”

Pitay: (musician)
“For me it’s a story of strength – meaning the show has improved my skills at working with a diverse group. Also, I’ve been excited to be a real part of the theatrics – in other shows the musician is side-lined, but Khmer Metal gets me up and running around with all the other performers!”

Vanthan: (musician)
“Khmer Metal has been a growing process where I’ve had the freedom to fuse modern and classical Khmer music forms – even getting to produce sounds from random items like a household kitchen bowl!  All elements of the show have been incredibly rewarding as I’ve been able to bring my own ideas to guiding the shows rhythmic flavor.” 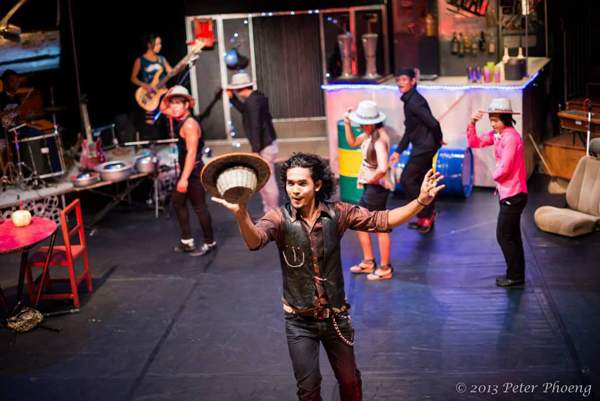 Rasrey: (musician)
“I’ve loved being able to up and dancing with the rest of the performers – unlike many other shows in the past where I show up, play, and leave, never getting to truly interact with anyone! And of course, the modern themes have been exciting to deliver to visitors to Cambodia.”