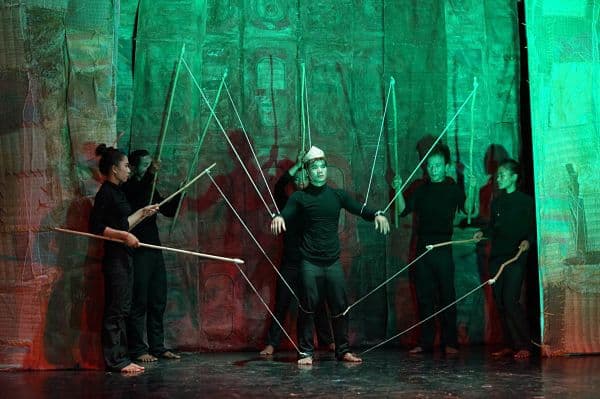 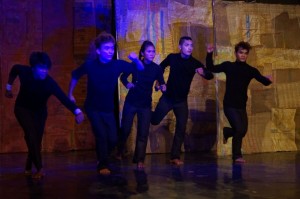 The presentation of a new show to the staff is a rare event. It triggers both excitement and anxiety. The tension rises under the big top as we wait in the dry heat of March. By 3:30 p.m., the show has still not started, due to last-minute sound and lighting issues. Some students giggle as they wait for their classmates to get on stage. The show finally starts at 4:00 p.m. and the audience breathes a sigh of relief.

Developing the show has taken ten months and included input from many Cambodian and international performing arts professionals. Det Khuon, the artistic director of Phare Ponleu Selpak, came up with the concept and is directing the show. Phare’s partner in France, Collectif clowns d’ailleurs et ici (CCAI), twice sent French performing arts professionals to help ignite the students’ imaginations and improve their performance. 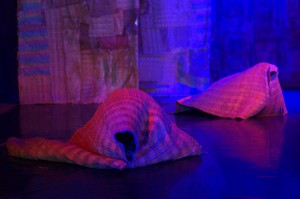 The show opens on a surreal scene showcasing animals made from straw matting. The simplicity of the animal costumes and their mouse-like movements make the audience laugh. This is in contrast to the extreme brutality with which those animals start attacking each other just minutes into the play. The level of aggression caused me to catch my breath. And so the show begins.

Elsa De Witte is a French actress and costume designer who specializes in making puppets. She came to Battambang for three weeks in November of 2014. The concept of puppets was her creative entry point. “I wanted to find local and affordable material: straw-mats, coconuts, bamboo, rice or cement bags”. She established a dialogue with the show’s artists to create the story collaboratively. “I worked on an uncluttered acting-style, […] [and I] strengthen[ed] the collective actions to serve the aesthetics of the show.”

Subtly and through repetition, Influence tells the story of domination – where one group or individual takes control over another. Through acrobatic fights, partner juggling, and group pyramids, the show retraces the story of unity and division. The circus figures illustrate poetically but accurately the inherent violence of domination.

Elsa and the artists worked continuously to refine their work. In March of 2015, Agathe and Antoine Rigot, creation process professionals came to the school for three weeks, to further refine the work within each scene based on the feedback and ideas of the students: “The acrobats and musicians [were] motivated and generous. [Their] commitment was of great quality.” 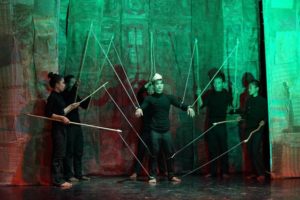 One scene affected me especially: the performers place a crown on another artist and use Diabolo strings to strap his legs and arms and animate him like a puppet. This scene marks the beginning of the show’s transition from an abstract circus performance about domination to a powerful observation on Cambodia’s colonial period.

More than the storyline itself, the performance moved me. Circus students at Phare Ponleu Selpak are required to complement their circus training with theatre training. Their level of acting helps build intensity and elicit emotions from the audience. The music, composed by Ly Vanthan, is played on stage by students from Phare’s music school and complements the performance very well. 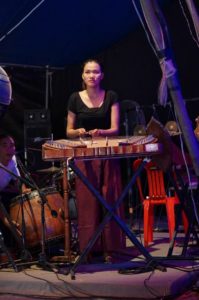 “Influence”, through the quality of its artistic performance and the strength of its message, demonstrates the ability of Phare to fulfil its mission of empowerment through the arts.

“Influence” was first performed publicly at the Tini Tinou International Circus Festival on May 16, 2015. It was very well received by the audience, who saw a great artistic creation, passionately performed. “Influence” is now in Siem Reap’s being even further refined for its premiere at Phare, The Cambodian Circus on September 7, 2015.

If you’re passing through Cambodia, “Influence” is an absolute must-see.