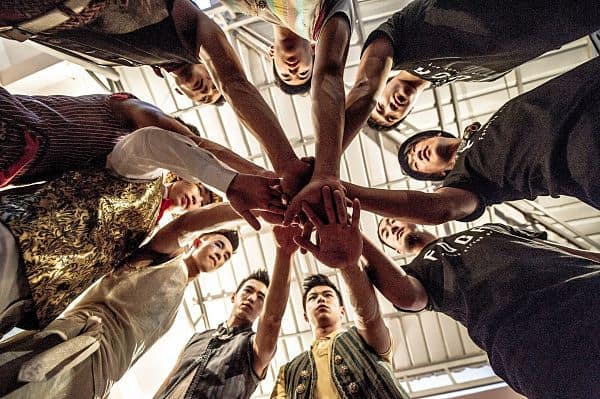 Six troupes from five countries will perform at this year’s Tini Tinou International Circus Festival in Phnom Penh, Siem Reap and Battambang. Over the next week, we’ll introduce you to some these artists and talk to them about their backgrounds, their craft, and their experiences at the festival.

Today we meet Allen Lin and Tsung Hsuan Lee of Formosa Circus Arts, who performed May 7, 8 and 9 in Phnom Penh, and will perform May 12 and 13 in Siem Reap and May 15 and 16 in Battambang.

Both originally from Taiwan—Allen from Taoyuan and Tsung Hsuan from Taipei—they took very different paths to get to where they are today.

Allen began circus training at the age of 10 at National Taiwan College of Performing Arts (NTCPA). It was a rigorous program that lasted eight years. Of the 40 students who began at the same time, only 10 graduated.

“In Taiwan, poor families send their children to this kind of school because the government gives them money. It’s free to attend, but the training is really, really hard, and if you can’t finish you have to pay the money back to the government.”

The students at NTCPA begin performing by the age of 14. “For eight years you belong to the country.” Allen was sent all over the world–South Africa, Australia, New Zealand, Canada, Japan, over 70 cities–primarily to perform for Taiwanese diaspora. 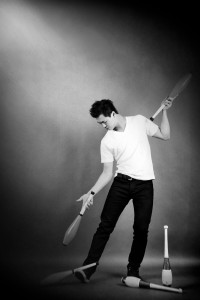 When he graduated at 18 he performed with various groups, experimenting with drama, theatre and musical theatre, but in the end realised that he “always belonged to somebody else.” The groups would need a clown or an acrobat or something else, but he was always using his skills to serve someone else’s agenda. He realised he needed to do something that gave him more autonomy, and, in his words, “belonged to us.”

During this period, he spent some time at the National Institute of Circus Arts in Melbourne, Australia. The purpose of the trip was to hone his traditional circus skills but he discovered that they were more focused on doing something new. They had moved past traditional and into contemporary circus where the idea was to mix different kinds of performance into a show.

Inspired, Allen formed his own company, Mix, in 2010. The name came from the mix of many types of performers, not just circus, but also martial artists, street dancers and modern dancers in the group. Last year, as they began to perform more internationally, they changed their name to Formosa Circus Arts to better reflect their Taiwanese roots. 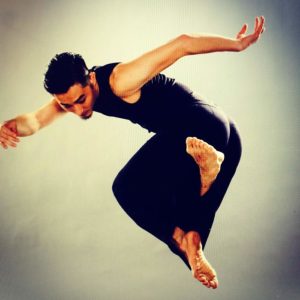 Tsung Hsuan is a dancer. After dabbling in street dance when he was young, he entered formal training at the Taipei National University of the Arts. After graduating he joined the prestigious contemporary dance company Cloud Gate, where he stayed for five years, performing on stages all over the world.

“In these five years I felt like I was doing the same thing over and over. Of course the dancing is amazing, and you always go on a nice big stage, and you don’t have to worry about anything because somebody takes care of it, you just have to dance. But it’s almost like a machine, you don’t have think anymore, you just do what you need to do.”

Two years ago Cloud Gate staged a piece called Nine Songs, which called for a performer with a background in acrobatics. That performer was Allen.

While rehearsing Nine Songs, Allen and Tsung Hsuan discovered a mutual interest in mixing types of performance to create something new. Allen invited Tsung Hsuan to do some choreography for his group.

“My background is in contemporary dance,” says Tsung Hsuan, “For me I was not just interested in showing how well I could move my body, I also wanted to show some meaning in the performance. So when I saw Mix I saw that they had so many different kinds of tools and I thought I could use those tools to tell a great story.” 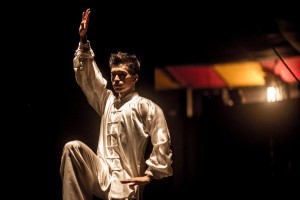 A year into their collaboration, Allen and Tsung Hsuan have seen immense success in Taiwan. This in spite of the fact that, as Tsung Hsuan says, “Performing arts in Taiwan are not the most popular thing. People have money but they don’t want to spend it on that kind of thing. So when we sell out our performances, we’re impressed.” They perform in various showcases as well as their own full-length shows. Later this year they will perform 16 shows at the Edinburgh Fringe Festival.

“We know we have something really new, maybe we’re not the best ones yet, but we’re the only ones in Taiwan who are doing this kind of performance.”

Formosa Circus Arts’ performances are a gorgeous, high-energy mix of acrobatics, pop and lock, breakdance, mime, martial arts, dance, diabolo and more.  Performers come from a variety of backgrounds, from traditional circus to street dance. “Skill is not the most important thing in our company because we don’t want a traditional circus where skill is everything and you just present skills, but for us what’s more important is story and meaning.’

‘We ask our performers to take classes to learn skills other than their specialties. We have street dancers, breakdancers, not everyone is a circus performers, so for them they have to learn acrobatics, which is really hard, but the circus performers have to also learn something new: dance.” 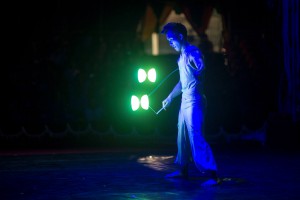 Shows are created collaboratively, with everyone in the group giving input and Allen and Tsung Hsuan overseeing and guiding. There are also underlying and unifying themes exploring modern-day relationships and the evolution of communication, especially in the current generation.

Allen and Tsung Hsuan have created two shows together with the group, both studies of how people interact and how they change as relationships develop. Tsung Hsuan says, “It’s always about people. This current piece is more happy, the last one was more the opposite, about when people become unhappy with each other and what kind of response they have to that other person.”

He explains further, “When we first know each other we are very nice and very kind, but after that people start to change. You say, okay, I know you already, you also know me, so I don’t have to take care of you anymore, maybe I can take care of someone else, because we are both busy and some things I don’t have to tell you again.”

Taking people for granted this way is true of any relationship, he says. “Especially in this generation, we can always be in contact even if we haven’t met in many years, but I feel that people are even more distant. I see my friends have these kinds of problems, and maybe I have these problems too. If we can so easily contact people, why do we have this kind of problem? I think people think they don’t need to make the effort because they can easily connect with you later, so no need to focus on it now.” 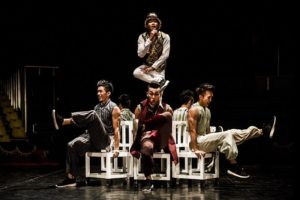 Of course, they don’t expect everyone to interpret their work this way. “We think that if there are 100 people coming to see our show, there will be 100 different interpretations. That’s also good, we don’t have to control what they see.”

Plans for the Future

“The idea is that we create a whole system, like you have at Phare, with the school and the circus. For us though, we’d like to create a place for performers who can’t perform anymore. They can go to this centre and retire there in a way. If they cannot teach, at least they can go somewhere to share their experiences and continue to be part of a community.”

“Starting this year, we will start to do workshops for people who are curious about circus or don’t know about circus, so they can have the chance to know circus””

“When we see the poverty here, it’s the kind of life we cannot even imagine. We feel that we are lucky to have the kinds of lives we have. Normally in Taiwan, the government has a lot of programs to take care of people, so there isn’t the kind of poverty there that you see here.”

“We want to use our skills to show the people of Cambodia something new. The original idea is that we would perform the show we created last year for this festival, but because they only needed 15-20 minutes we decided to make a new show. This is a brand new show.”

“We’re happy to be part of Tini Tinou. With smaller festivals like this, you meet people who really want to do this kind of stuff. The performers are here because they are passionate and love what they do.”