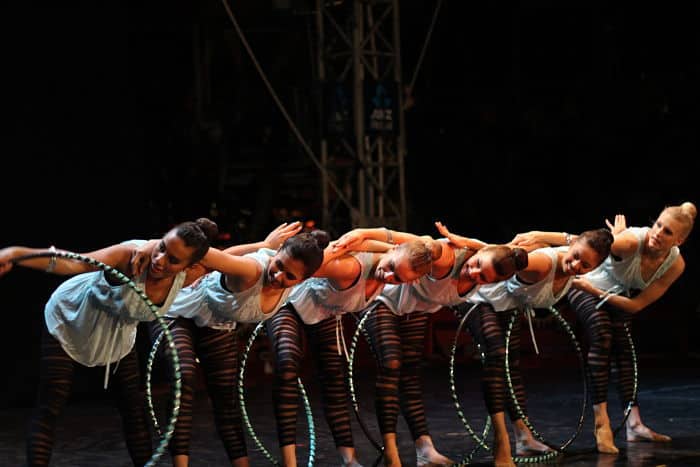 Six troupes from five countries have performed at this year’s Tini Tinou International Circus Festival in Phnom Penh, Siem Reap and Battambang. Over the past two week, we’ve introduced you to some these artists and talked to them about their backgrounds, their craft, and their experiences at the festival. 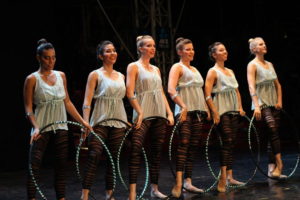 Les Papillons is an amateur dance group from Teufen, Switzerland. Its members took rhythmic gymnastics classes together as children and competed around Switzerland throughout their teens. When, at the age of 16, some of them started to become too old to enter competitions, they formed their own rehearsal group. It started out informally with three members, and others joined as they retired from gymnastics and participated off and on between pursuing other interests, school, careers and travelling. It’s a passion, but not a full-time profession for its members.

Q: How did Les Papillons first come together? 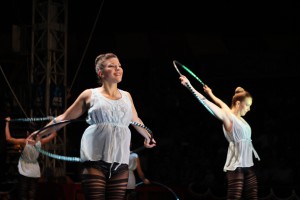 Les Papillons: There are not so many possibilities to do rhythmic gymnastics in Teufen. There is only one place to do gymnastics, at the sports association in the village, so anyone from the surrounding area who was interested in had to come there. Teufen has a population of about 6000 inhabitants. Some of us live there, but some of the other girls come from villages that are about 10-15 minutes away. When we started there were about 20 to 25 girls doing gymnastics. It’s not a big city so there aren’t many people in the gymnastics community and we do a lot of regional competitions, so we get to know each other very well. When we started the group, we wanted to do something new, more for us, more for fun and not competition, which can be very strict and regimented.

LP: We meet several times a week to practice and create performance pieces. We have nine girls in the group right now, though that may change at any time. It’s always open for girls to go and come back and be part of the group or just train at the gym where we practice. We still participate in amateur competitions around Switzerland, about four or five times per year. For example, we’ll compete in September at the Swiss Championships. 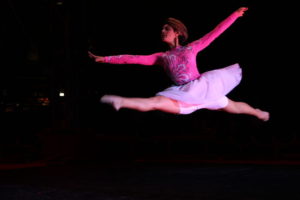 During a performance in Phnom Penh.

Q: How do you create performances?

LP: Everybody has ideas, and we watch a lot of YouTube videos. We start with the music. It takes us ages to find the right music and for everyone to agree. We mostly find music on YouTube, and any original music is done by a friend of one of the group members. Once we have the music, we watch more videos of rhythmic gymnastics, or dance, or whatever we can find to get inspired. There’s a new sport, called aesthetic gymnastics, which is closest to what we do, so we watch a lot of videos of that. Everybody in the group gives ideas and we create from there. It takes a long time.

Heidi Burch Ebneter (the group’s de facto leader) is a secondary school teacher. After 10 years of teaching she was eligible to take a sabbatical. She decided to spend some of that time volunteering abroad and, while looking for organizations to work with, happened to see some photos that a friend had posted of recent trip to Siem Reap. He had visited Phare, The Cambodian Circus and when Heidi saw how young the performers were, she thought there must be an artistic school or training program they attended. She did some research, discovered Phare Ponleu Selpak and emailed them to see if she could volunteer. 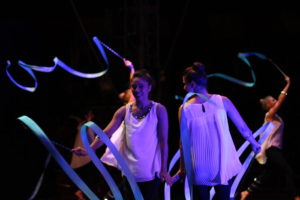 On stage during a performance in Phnom Penh.

When the school got back to her, they told her that they had just started a dance department and that she was welcome to come and spend some time there and give some input. She spent two months at Phare Ponleu Selpak in the spring of 2014 working with the dance department, learning about classical Apsara dance and helping the director of the dance school.

When she returned to Switzerland, she shared her experiences with the group, and, when the Tini Tinou organizing team got in touch with her to see if Les Papillons might be interested in joining the festival, she thought it would be a great opportunity. After coordinating schedules—a superhuman feat for an amateur group whose members are concurrently working and studying—Les Papillons landed in Phnom Penh to embark on their first ever tour.

Q: What’s your experience been like so far on tour? 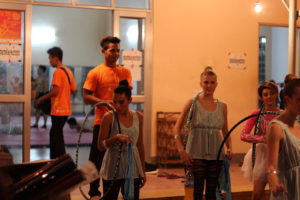 LP: This is our first time on tour. And our first time in Cambodia. It’s just amazing. All the new experience and new friendships. When we first got here, we didn’t know what to expect or really what was expected of us.  We saw that there would be a lot of professional artists and we were a bit intimidated. We’re a bit different than the other groups, but it’s good. It makes us a bit special.

Q: And what do you think of Cambodia?

LP: People are so friendly!

It’s nice to go to a country and to meet so many local people and to work with them. It’s more real, and totally different than other travel we have done.

See more photos from the event on our Facebook page.