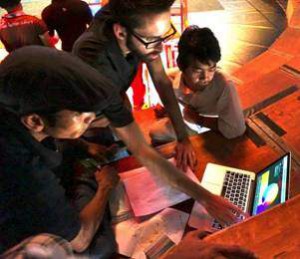 Production Training from a Montreal Expert…

Pierre-Luc Brunet began a 3-week lighting tech workshop this last week. Thirteen technicians from Phare in Siem Reap, PPS in Battambang, as well as a few others from local arts and education organizations gathered to improve their understanding of standard lighting techniques. 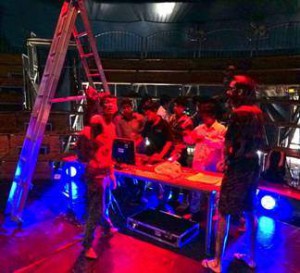 Now a professional live event producer, Pierre first found his passion for the technical side of events back in high school when he worked on various music and theatre productions. Since then he has worked on projects such as the launch of Microsoft’s X-Box Kinect promotional event in 2010—Microsoft booked Cirque du Soleil and a large arena in Los Angeles to kick off the product and Pierre was there to handle the massive video projections that illuminated the various levels of the space. 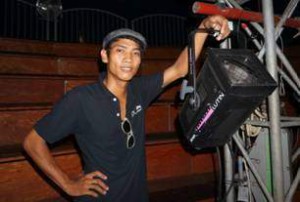 Later, traveling around Asia for nearly a year with his girlfriend, they heard about Phare Ponleu Selpak while traveling through Bangkok and decided to come Battambang and volunteer for a few months – helping smooth out needs in technical and facilities departments.

Now in Siem Reap, Lead Phare Technician Yietheanne and others at Phare the Cambodian Circus are digging in deep to learn about the creative and spontaneous side of lighting an artist – attending to the side of a production that we often take for granted.

The workshop has been a challenge with such varying levels of experience in participants and has focused on lighting design, equipment and terminology, standard practices… but also the importance of getting creative with their work, setting and altering the moods of performances with various colors and contrasts.

The team has been encouraged to develop their own creative perspectives on what looks best and has been practicing daily with lighting improvised movement by various artists from our currently running production Proniap! – and afterwards discussing what worked best.

After your long day at the Angkor temples, come see what they’ve learned in action at tonight’s show… and afterwards, let them know what you liked! Arrive early or go Seat A and be just outside the spotlights.  See you there!