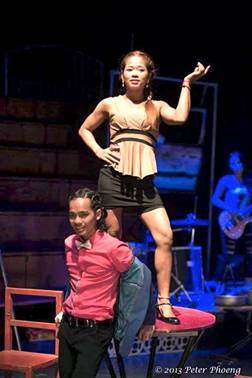 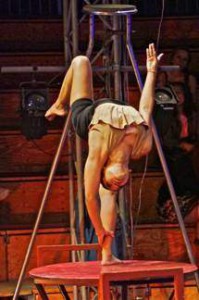 Meet Phounam Pin. 22 Years old, born in Battambang, she is a contortionist and hand balancer with Phare. She currently performs in the racy and comedic show Khmer Metal.

Working as a rubbish picker from age 7-13 with her sister, Phounam attended a public elementary school until the school at Phare Ponleu Selpak (PPS) caught her eye. She admitted really, at first, she just joined the school for the free food. And, the school had a good library where she and other students could hear stories read by teachers. It wasn’t long before she started reading the stories on her own and found that she was quite good with words and languages. Phounam started studying English and living in the Children’s center, and at age 11, started circus study. At first she wasn’t terribly interested until her teacher urged her to choose a skill. Amazed by what she had seen contortionists able to do, she decided to give it a try. A few years later at 16, she was sent to study contortion for a year in Vietnam. Getting up early in the morning, she spent long hours stretching every day and built confidence until she finally felt ready to perform. 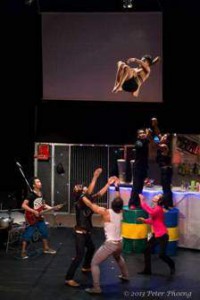 Phounam’s future dreams can be summed up in one word – travel!! Traveling and performing with Phare has been very exciting for her and she is hoping to continue touring the world as a performer; getting to know new and totally different people and places.

When asked what she likes most about her job, Phounam says it’s satisfying to do a thing that others cannot- it validates all the hard work she has done to build her skills. She admits it’s also nice to receive the accolades from the crowds, but sometimes criticism comes as well. “It works both ways,” she says, “but it’s always worth it.” 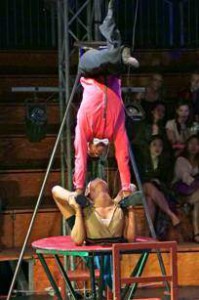 Favorite trick? Phounam revealed that she secretly has always wished to be a high-flying acrobat, and admires them the most. Her fear of heights has always stopped her until recently when she started training some partner stunts where she is launched through the air and caught by her teammates. … In terms of her more central skills: balancing on her hands while firing a bow and arrow with her feet is her favorite. She usually hits her target, but she likes it most because “it feels like life… every time I miss, I learn from the mistake, try again, trial and error until I learn. And I always learn eventually.”

In the future, Phounam wants to improve her modern dancing and partner acrobatic skills, but then she also has a unique dream of mixing circus and contortion skills with painting. 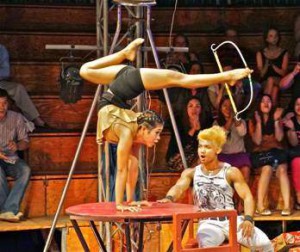 Surprising facts? Phounam is fluent in Thai, Lao, English, Khmer, and French. Before Phare she dreamed of being an astronaut; she wanted to travel to the moon and was interested in the earth and why does the sun rises and sets. And last but not least… she is a great noodle chef.:)

Keep your eye out for Phounam in the future… her skills might just deliver her to a circus tent near you!