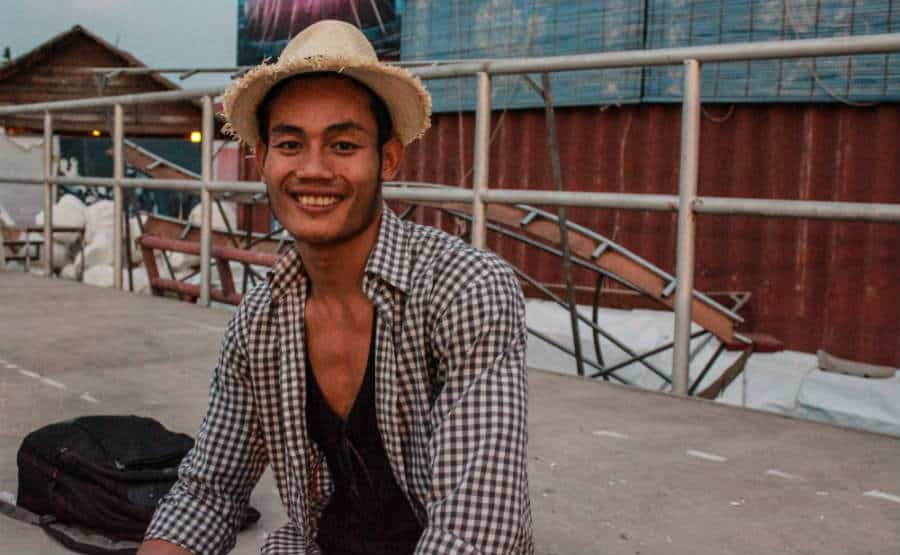 Dina is a circus artist with a secret talent… in the kitchen!

I got to know Phare through my Uncle who was actually one of the founders. At that time I was in Battambang and I was participating at public school but there were many problems in many areas of Cambodia. In the rural areas where everybody participates in the rice harvesting there aren’t many people attending school, including teachers a lot of the time. And so I had this free time that made me think that I could join the circus activity.

Was your family a farming family?

Yeah my father and mother were farmers and they had 2 hectors of rice fields and so there was this problem of the teachers not coming because they were working in the rice fields but also myself being busy at home, helping with harvesting sometimes or doing some work at home for them. Every kind of small work.

Why did you think it was a good idea to join circus?

So there were different departments at Phare at that time. There was music, theatre, painting and visual arts and so my first desire was for circus. So I tried the circus, but knowing that if I wasn’t good at circus I could have tried something else and then something else. I wasn’t sure about this but it was my first preference.

Did you have a reason why?

Yeah it was the more impressive activity for me because the jumps themselves aren’t something that you see in your everyday life. It was something totally different to my ordinary habits and also I could see all the people, already practicing, making amazing things and I wanted to see if I could be able to do that. And they also had beautiful bodies thanks to the practice and that made it very attractive to me.

What has it given you?

It has given me the opportunity to change my life condition and the one of my family because I wouldn’t have any other opportunity to earn such a good living so fast with another job. There was always one part which I would keep for me but also one part which I would give to my family. Coming from a poor family that’s very important to me – this opportunity to better the standards of living for them. Then secondly it’s opened my mind a lot because it’s given me so many opportunities to travel. That’s very important for me, that I knew some foreigners because they have a completely new view on the world and on how to live life. For me it’s this connection with the foreigners and being able to perform abroad and having the opportunity to be on stage. All these things have really helped to open my mind and get me out of a narrow vison of a Cambodian life.

So where have you travelled?

Do you have any rituals before performing?

I don’t have specific tricks but I respect the schedule which we have which is a rehearsal in the afternoon and then we really take time before the show, have a small break and snack, take a shower and the really rest. That’s 1 hour before the show. Then we do make up and costumes and then concentrate on the whole group. I am very careful about keeping that.

How would you describe your role in the show?

I actually have 4 different characters.

What is it like for you to portray that Khmer Rouge character?

How do feel telling the story which is how Phare came to be?

For me it’s amazing that we have this opportunity to tell this story of the construction of the structure which put the show together. For me it’s very emotional to know that the audience will see the show but also learn through that show bout the evolution, both the life of the performers themselves.

Who do you live with here in Siem Reap?

When ai perform I go and stay with the other artists at the Artist villa. When I am not performing I dot go back to Battambang like the others, I stay in Siem Reap in my uncle’s house. There are 8 of us living there. I don’t meet him so much when I’m there though because of my working hours…

When you’re not performing what are you doing?

I learn English and French in the mornings… actually even if I perform Sokha at night time I will go to these classes. And in the afternoons when I’m not performing I help my uncle’s family with work at home.

What do you like to do to relax when you’re not working?

I like to listen to music, I like to read books and a love to cook, that’s my big speciality… and it’s something I would like to carry on to the future after circus.

My main motivation to become a cook is because I like to eat good food! To be able to eat good food, and to be able to really get what you like I think the best solution is to cook it yourself because when you eat outside you’re never 100% satisfied with what you get because only you yourself knows the best of what you like. I like to do that and I like to make it very personal. I can master some very common Cambodian food like frying or making soups, but I also like making things I have never made before and just do it with my own heart. Sometimes it comes out really nicely…

What’s your favourite meal to make?

One very easy thing I like to do is just fry an egg with very special spices and very special other ingredients. It’s not an omelette, I just put an entire egg in the pan with oil and then I just have these little things that make it delicious and then I flip it over and I continue to fry it on the other side. It’s so simple but is delicious!

It’s my own invention, and I think I make it very nicely now… I have my tricks!

So that’s your plan for the future, be a cook?

Really I want to be able to have a steady job after the circus where I can live a comfortable life and have a happy family, as well as put away some savings. Then around the age of 50 I would like to retire and to travel. Travel is very important for me, I want to be able to take my family to see something else apart from Cambodia. 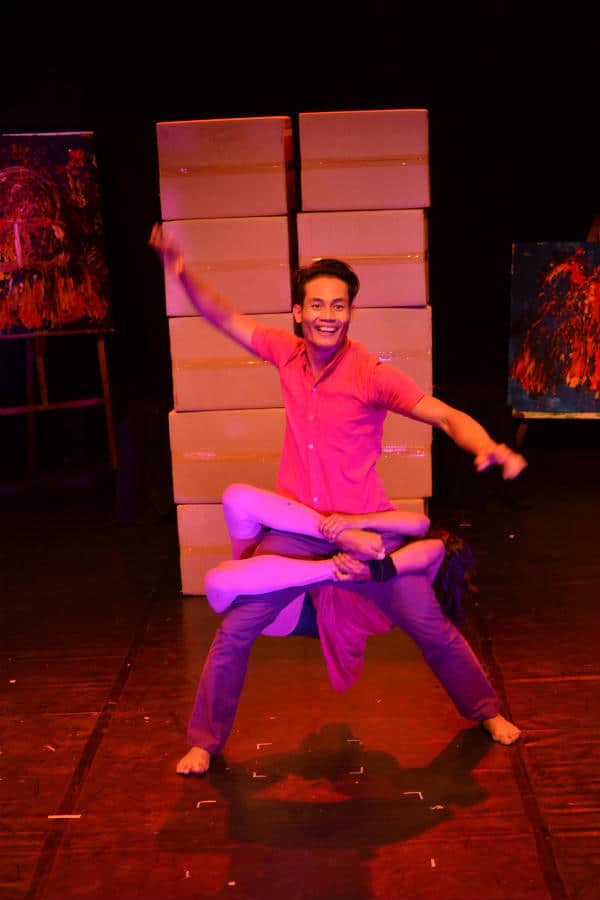 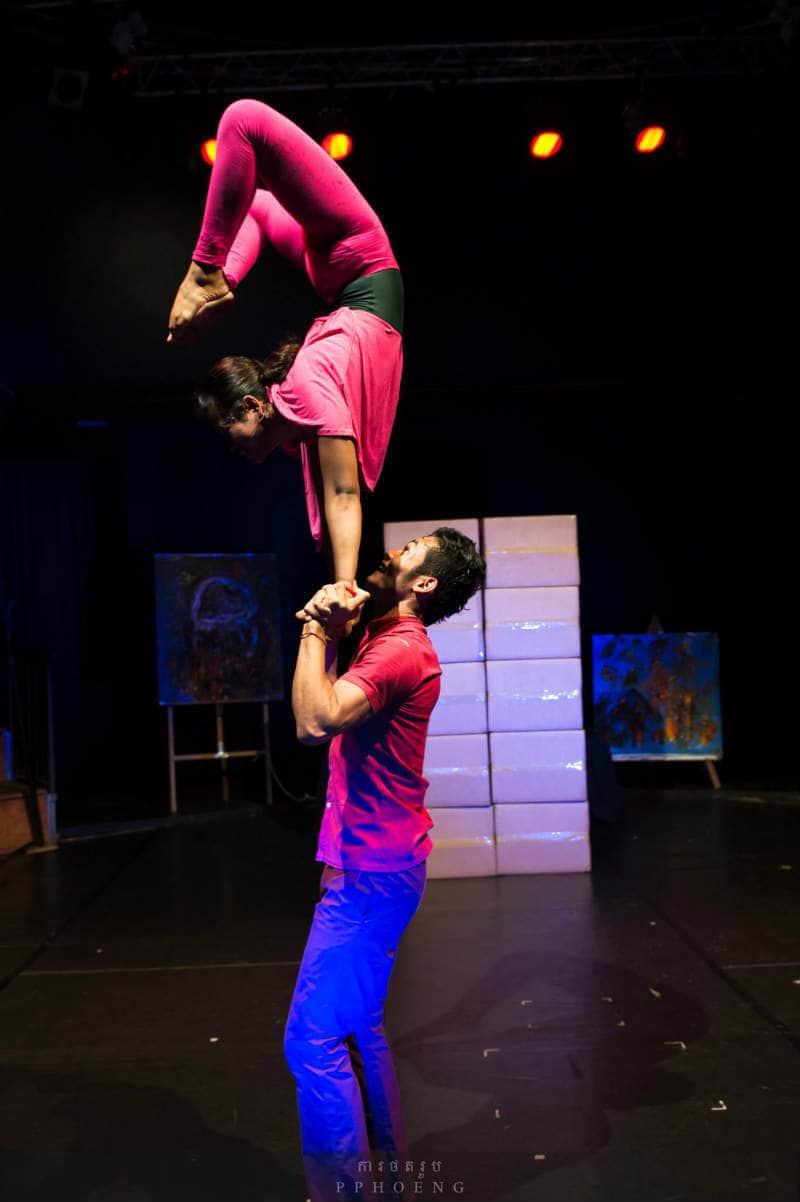