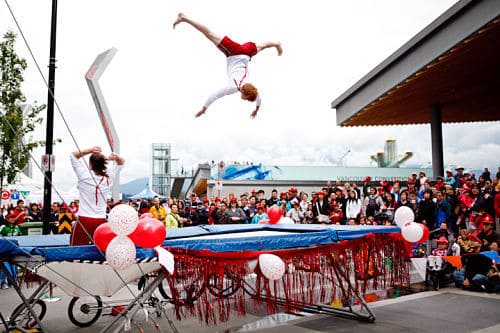 Circus artists from five countries will perform at the Tini Tinou International Circus Festival from April 28-May 10 in Phnom Penh, Battambang and Siem Reap. Artists will also participate in a series of workshops to learn new skills.

One of these workshops will be led by Travis Johnson, the owner of Vancouver Circus School, and a founding member of the Asian Social Circus Association. Travis began bouncing on a trampoline around the same time he was learning to walk. He has been trampolining ever since, and will share his expertise and skills with the artists of Tini Tinou.

Q: I understand that you grew up in a family where gymnastics, acrobatics and trampoline was an important part of your life. Can you tell us what it was like growing up in an acrobatic family?

A: Growing up in a world of trampoline tumbling, it was unknown to me that there was a life outside of trampoline, my mother was the very first Canadian National Trampoline champion and my father was team Canada’s trampoline coach until I was 16. All of my babysitters were trampolinists, and I basically lived in the gym. If only everyone was so lucky! Only at elementary school did I find out that not everyone did trampoline, I guess you could say that I was very immersed in acrobatics from a very young age.

Q: You currently own and run a circus school in Vancouver, Canada. Can you tell us more about the school?

A: The Vancouver Circus School is Canada’s largest privately owned circus school, having over 800 students coming through our doors each week. With a staff of over 40, and 2 locations, our school has become a recreational leader in western Canada.

Q: What are you most looking forward to during the Tini Tinou International Circus Festival?

A: I am looking forward to sharing my education with the south Asian population, trampoline is very important to me, and I’m honored to be able to share my family’s legacy to a new region of the world.

Q: Have you ever been to Cambodia before?

A: Yes, I was there last year and had the great opportunity to visit Phare Ponleu Selpak in Battambang. I was moved to tears during the Phare show in Siem Reap, and look forward to spending more time there.

Q: What other countries have you traveled to for performances and delivering training in trampoline?

A: Most of our shows are in Canada, however we did have the pleasure of performing in India for the Indian Premier League grand opening in 2011, after India had won the world series of Cricket. We also had the privilege of performing with Bollywood’s mega star Shah Rukh Khan.

Q: Can you tell us more about your involvement in the Asian Social Circus Association?

A: As a founding member, my involvement is quite involved and very important to me. My father was a social worker who also did circus, and I am proud to continue the path of social circus. My next mission is to become more involved in social circus in my hometown of Vancouver. When I met the other board members, it was just after we went to Pattaya, Thailand to open a circus school at a childhood protection facility, unfortunately my father passed away 5 days after I came back, so the social circus school, was the last school my father and I built together.

Q: As part of Tini Tinou International Circus Festival, you will be running a number of trampoline training workshops in Phnom Penh and Battambang. Can you tell me about your approach to sharing your skills and expertise on the trampoline?

A: I will be running a very pedagogical approach to trampoline. Trampoline is based on having a strong physical literacy and creating strong foundation blocks in which to build from, I will be ensuring that all trainers understand the breakdown of skills method, and how to correct errors in technique in order to keep all the students safe.

Q: Do you have any advice for kids who want to join the circus one day?

A: Do it, it makes everyone feel good, I only wish it could affect more kids, and adults!

Get more info about Tini Tinou and book your tickets at www.tinitinou.com.

Learn more about the Asian Social Circus Association and the Vancouver Circus School.