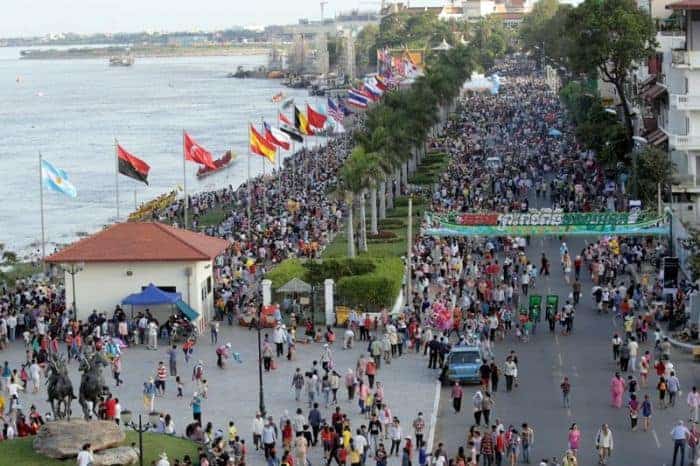 The Water Festival takes place over three days in November all over Cambodia. The biggest celebrations are along the Tonle Sap River in front of Royal Palace in Phnom Penh. This year, 2021, the official activities such as the boat races are still suspended to minimize COVID risk. However, businesses are allowed to have their own events. Cambodian Water Festival was first celebrated in the 12th century, around the time of Angkorian King Jayavarman VII. The King’s Navy helped usher in the Cambodian fishing season. The festivities made the gods happy and secured good harvests of rice and fish in the upcoming year.

Another story is that Bon Om Touk was a way for the King to prepare his navy for battle. There are carvings at Bayon Temple, at Banteay Chmear that show naval battles similar to the boat races in present-day celebrations. 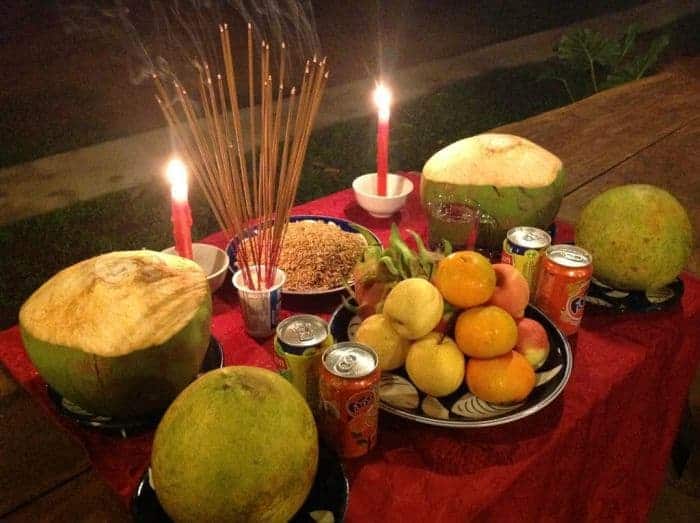 Water Festival is celebrated in every province, but many Cambodians make a special trip from the provinces to the capital city, Phnom Penh. They usually spend at least two day enjoying the festivities. In Phnom Penh people gather for big boat races, illuminated floats (លយប្រទីប), a moon salutation (សំពះព្រះខែ) and eating of special rice made with banana or coconut juice (អកអំបុក).

Many people spend all their time at the boat races. Khmer find a spot along the river, lay out a picnic mat, eating and drinking, and cheering for their teams. Boat race participants usually arrive a few days before to practice along the Tonle Sap River. Boats are often sponsored by individual donors and government officials.

At night, after the races, you will see people floating small, handmade boats in the river along with many, many floating candles. Different government ministries create their own larger illuminated boats.  Later in the evening there are beautiful fireworks displays that last around 20 minutes.

What can you do during Water Festival: It is a national three-day holiday, so many Cambodians spend the time celebrating with their families. They go to see the boat racing and some travel around the provinces to see how they celebrate water festival in different communities.

The second night of the Water Festival is a full moon. Many celebrate and pray to the moon by putting things like fruits, coconuts and special rice in front of their houses. They believe that by doing so, the moon will give them good luck. My mother says, “There is a rabbit living in the moon and looking at us,” and I believe her.

Water Festival celebrations in the provinces are a little different compared to the city. I remember when I was a child living in Kampong Cham province. My brother and I went to the pagoda to see people dancing and lanterns floating up into the sky.  People in my hometown make illuminated boats with flowers or lotus leaves and put candles inside. Along the road there no electricity, only the moon light. Sometimes, I really miss my childhood during this time.

Now I live in Siem Reap and have come to enjoy the festival here. In 2015 many people celebrated the Water Festival in Siem Reap. It is a good alternative to Phnom Penh because people can also visit the temples of Angkor at the same time. There are also exhibitions of products and services along the river, and also entertainment at night. I hope this upcoming water festival will keep bringing a lot of Cambodian and tourists to visit.

Follow us on Facebook and see how we’re celebrating Bon Om Touk at Phare, The Cambodian Circus