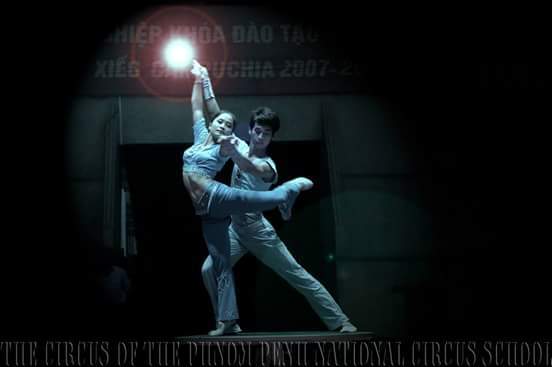 Six troupes from five countries will perform at the Tini Tinou International Circus Festival from April 28-May 10 in Phnom Penh, Battambang and Siem Reap. Over the next couple of weeks, we’ll introduce you to some these artists.

Today we meet Phon Chan Pisey of the National Circus School of Cambodia, who will perform in Phnom Penh on April 29 and May 1st. Check the program for more information.

Where are you from?

I’m Cambodian, and I was born in Phnom Penh. 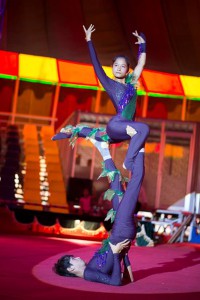 What do you do?

I work for the National Circus School of Cambodia. I’m a teacher and a performer. I specialize in contortion and aerial silk.

When did you start doing circus?

I started doing circus a long time ago, when I was young. I started when I was 11 years old and now I’m 28.

When I was young, my house was next to the National Circus School. They had a canteen in the school and every morning I would go there to buy breakfast for my mom, every day. I would climb over the wall from my house and go down into the school and I would see all the dancing and the music and it was so interesting! And then I would buy food and go back through the school and see something else and then go back home.

I was so interested in circus, but my father didn’t like it because in Cambodia they don’t like it when women have muscular bodies and open their legs widely. They like it better when women are more delicate, like in Apsara dancing. My mother likes that too. But for me it was different. I liked circus.

Like the trampoline! I’d never seen anything like that! I wanted to try it, but I was a child and they didn’t want children inside with the students. So I watched and I tried to do some of what they did at home by myself. And I could do it!

I used to call to everyone, “Hey, do you want to see the circus? You have to pay me money and you can see me do it. The uncles would say, ‘No, I don’t believe you. You cannot do that.’ And I would say if you give me money, I can do it. Then they would put money by my foot and I would bend down backwards and pick it up with my mouth. And they were so surprised.”

I told my parents that I wanted to join the circus. My parents were worried, but they agreed and I’ve been studying ever since. I took a break from circus to study at university. I studied Theatre Production and Stage Management at the Royal University of Fine Arts in Cambodia. We learned how to direct, write, do costumes, everything that’s on the stage. It was so hard! For the exam we had to create a new original short story and do everything, costumes, writing, directing, finding performers, and then present it. 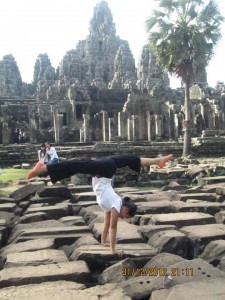 And now you’re a teacher?

I’ve been a teacher for one year. I still perform, mostly with my partner Vannak. We create new stories and shows together and perform. For Tini Tinou, we created a new story for the three days that the festival is in Phnom Penh, along with our teacher at the National Circus School, Narin. It is an old Cambodian story. A beautiful lady come down from the sky, like an angel or fairy, and she is playing in the water when she is captured by the king. The king had dreamt of her when he was sleeping and so he captured her and brought her back to his palace. They eventually fall in love. It’s a long story, but for Tini Tinou we had to cut out some it because we only have 15 minutes and we had to fit in the acrobatics and contortion and clowning.

What are your hopes for Tini Tinou?

I’m so happy when the international artists come here. It’s a good experience for me. I get to see something new, do workshops with them, see something different. And it’s nice. We become very close and develop good relationships.

Get more info and book tickets for Tini Tinou 2016 at www.tinitinou.com.

Browse all the Tini Tinou blog posts and learn more about the visiting artists.