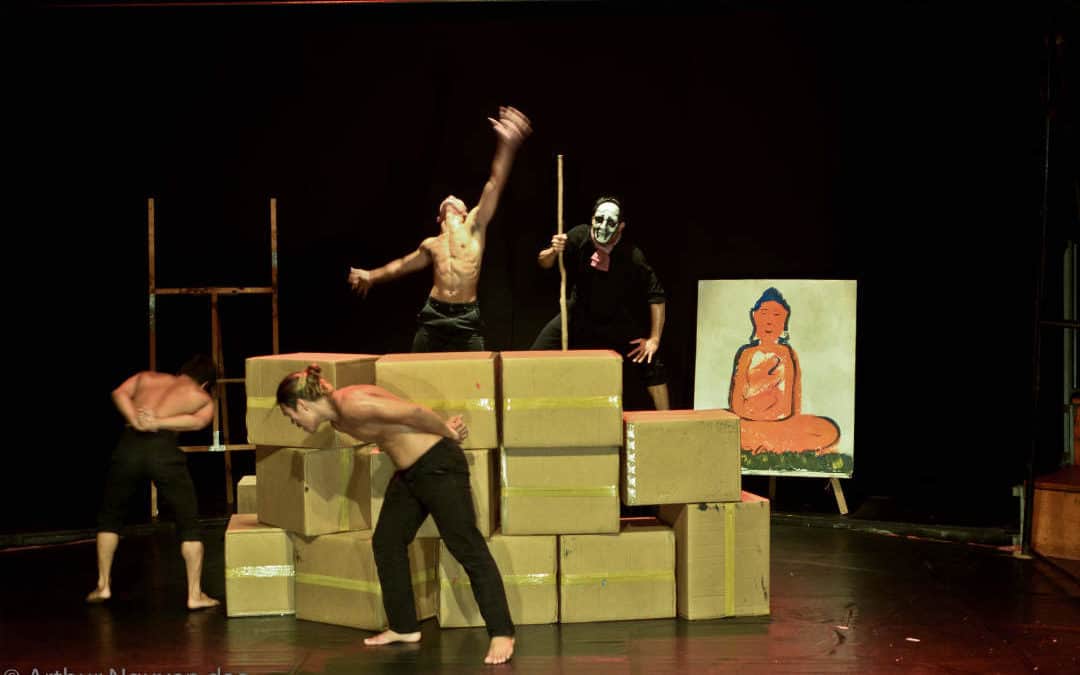 The Phare Circus show, Sokha, tells a powerful and emotional story and is full of Cambodian symbolism. It’s based on the true-life experience of Phare Ponleu Selpak’s founders – from when they were young students in a thriving Cambodia, their survival of the Khmer Rouge civil war, and through to their vision and creation of a school using art to help heal and educate other children.

Throughout the show, the many symbols and metaphors are used to strengthen the emotions felt by the survivors. The technique of live painting is used in the show to help describe what time-period we are currently in – what is happening? Xavier Gobin, Phare’s former creative director gives us an in depth insight into the Cambodian symbolism in Sokha.

Boxes are used as a variety props in the show. At the beginning, the performers carefully arrange them to represent Angkor Wat during a peaceful time in Cambodia. They are then transformed into desks for the lively students who will later cower under them in terror. The falling of the boxes towering to a great height represents the fall of the cities building blocks. Throughout the show, the boxes are symbolic of the everlasting burden that people carry as a result of the chaos. The final shape is a sign of independence, and the journey towards a peaceful and abundant Cambodia. 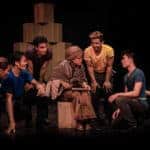 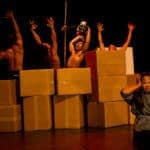 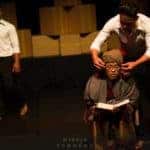 The very first painting that we see is of a traditional Buddha statue, referring to times when Cambodia was a peaceful, religious, and thriving country. The second canvas then portrays bombs exploding in Cambodia, as its people look on devastated and hopeless. The red hand prints represent the desperation and sadness of the people that are so eager to escape the Khmer Rouge. The third piece is about the destruction of religious freedom – the painter covers the original Buddha with black paint, erasing all signs of religion. He goes on to paint the chaotic scene which represents the Khmer Rouge regime… Flipping it upside down; he reveals that it is actually a skull. “It’s showing that the regime is not going to lead anywhere but death for everybody. And that’s what happened – the regime was not sustainable itself because it killed more than 2 million people. It lead to its own destruction and that’s what the skull symbolizes.” 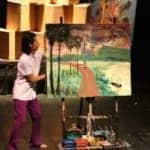 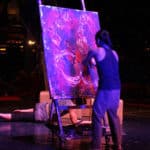 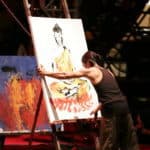 The final painting is described by the creator director as very narrative. “It describes the evolution of the society and the reconstruction… Sokha decides to come back to Cambodia after being a refugee, and we can imagine it’s the 80s and early 90s where the country, after the Vietnamese occupation, suddenly opens its borders again. The country is just standing up again after the war. You have the countryside being painted – people say the Cambodian countryside was always a very peaceful and a generous place where people could live from their work. But then also to signify that time is passing we have the painter suddenly painting roads, lights, and then buildings. It’s really to make people understand that time is passing and the country is being rebuilt.”

Symbolism of the men behind the masks

The use of masks to depict the Khmer Rouge creates a haunting and disturbing image of these characters. However, there is more depth to the use of the masks other than being frightening. “The masks are a direct transfiguration of the craziness of this period. It was people, it was every day normal people who suddenly took over some monstrous roles. This symbolism of masks shows how people transform their features to the dark side of themselves. The mask is a second face showing that there were almost two sides to these people and when they took on their roles they weren’t completely themselves. Some of them take off the masks and are suddenly the ones that suffer and escape.” 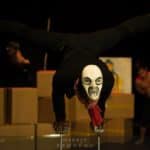 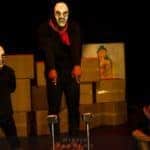 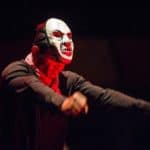 “There is one part in the show where an executioner is feeling powerful by executing others. Suddenly, when he’s done, he looks back and he’s scared – he takes off his mask. It’s the symbolism of who you are behind that role you had during the war. The executioners were also victims at the same time.” There is also a ‘rola bola’ scene in the Khmer Rouge period, which is very symbolic. “It shows how they tried to build a country and society which was very unstable. They are not building on solid foundations and so it was a disaster.

The art of healing

Another strong metaphor in the show is the use of a set of black, heavy juggling balls and lighter, brightly colored ones. A young student who is traumatized and cannot express what he’s seen takes the stage, struggling to juggle with three, heavy, black juggling balls. The black balls represent the weight of his experiences on his conscience. What Sokha, his teacher, wants to do is get rid of this weight by teaching art. She slowly replaces each black ball with a shining orange one – a metaphor for replacing those negative feelings with positive thoughts and hope. He’s not trying to forget the past but more to find a way to deal with those heavy thoughts and to manage and transform them. Sokha helps him to transform his bad memories. He still has to juggle, he still has to be active, but he has to be active with positive thoughts. It’s a beautiful metaphor for the transforming your dark past into positive and dynamic actions.

Sokha returns from the country where she is a refugee, because even though she is thriving there, she desperately wants to share what she has learned with the people of Cambodia. She does this through teaching art – transforming the lives of hundreds of Cambodian children and in the process, helping them fight their demons.

Read about the author of “Sokha”, and one of the original founders of Phare Ponleu Selpak Artistic Center: KHUON Det.

Who is the amazing musician in Sokha? Vanthan Ly. Vanthan wrote the music for “Sokha” “Khmer Metal” and many other Phare productions.