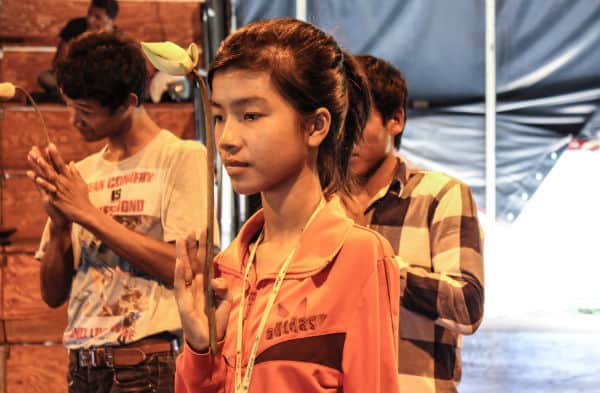 For the last few months the team from Phare have been working with a group of performing artists, all living with disabilities, to develop their skills and polish their performances.

The Cambodian Landmine Survivors group has been going for 8 years and is made up of nearly 20 people who not only are survivors of landmine blasts but also people affected by polio, have become disabled due to heath issues and illness, injured in traffic accidents or who were born with other conditions such as Cerebral Palsy.

The group comes together three times a month to perform a theatre, singing and dancing show at Amansara in Siem Reap. They tell a story of discrimination and the challenges faced by people living with disabilities in Cambodia, with the end message of reintegration into the community and acceptance.

Muy Seu Bel (Bel), is one of the managers of the group. A landmine survivor himself, he has a lived experience of the huge challenges facing disabled people in Cambodia.

“In Cambodia there are a lot of landmine victims. They are very poor, they don’t have jobs. In Cambodia they have the idea in their heads that someone who loses a leg, loses an arm – loses everything. They think we can’t do anything. They don’t think we are important. You want a job? No one will give you one… that’s why we have made this performance troupe, to show how landmine survivors, or disabled people can do it. To show others that we are all normal people and to give us a chance to do something.”

The shows are a way for these artists to get a small income, but also to have the opportunity to work with others who see them as a person rather than a disability, and to feel empowered by that.

Vat Soklai is the lead actor/singer in the show, “performing in this show gives me a career to develop. It gives me confidence, friendship, hope and makes me realise as an amputee I can still do things. I have a job, skills and knowledge – that belongs to me”

Eang Mou Lin is just 15 years old and lost her arm after a routine vaccination created a cyst which got incredibly infected. She’s currently studying at school and being part of the troupe has been the first time in her life she’s felt fully accepted and encouraged. “I’m so happy to be part of the troupe. When I come here we work as a team, we help each other, give each other ideas. There is no discrimination and everyone keeps saying that the disabled person can do things the same as normal people. They have explained to me that even though I don’t have an arm I can do the same as anyone else.”

Phare has been running workshops for the group, led by Vannara, one of the first generation students at Phare Ponleu Selpak. She has been working with the group, giving them some direction and improving their performance.

“I’ve helped them to be more present on stage, taught them what it means to be an artist on stage. I have also helped them to be clearer and the stories easier to understand. Working with the characters and their facial expressions and body language… I have showed them a lot, things they thought they couldn’t do!”

Vat Soklai says “there were lots of benefits of this training, and working with Vannara. It helped develop the characters, the focus of performing and what it takes to make a great performance. The team has now understood that when they perform they are a real art troupe… we’re not just doing it for fun.”

A bit about the story…

“At the beginning there is a community, like a village. They have all come together and are having a party. They drink, they dance, they are happy. Then there is one person (Played by myself) who wanders away from the group. That person gets into an accident because he steps on a landmine. It explodes and one leg is blown off.

Some of the community members hear the blast and came to help – there are two of them. The rest don’t help, they don’t like people with disabilities.

The three of them, the injured one and the two helpers go around the villagers and ask for help, for water, for food but they don’t give.

They don’t reintegrate the person back into the community- they kick him out. Even the people who first helped the man don’t continue to do so… they kick the outcast out.

In the same community there are two others who are disabled, they’re also kicked out because of their differences.

After there is a scene about animals. I play drums that represent the forest, where I now spend most of my days. There is a giant and a monkey. They see each other and they have some conflict, they fight. Then at the end there is a big noise to tell them that fighting is not the way to solve a conflict… then they stop fighting.

There is another scene that is a love scene… and then at the end there is a reintegration scene as well when the people with disabilities are welcomed back into the community.”

The stories being told are very similar to the all of the performers own experiences.

You can see the troupe performing at Amansara throughout the year. 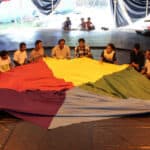 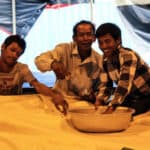 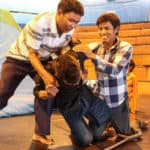 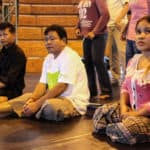 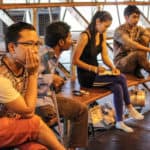 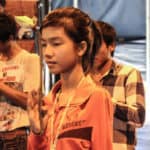 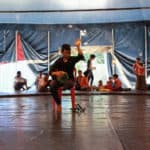 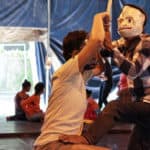 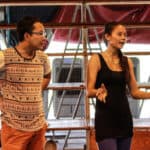 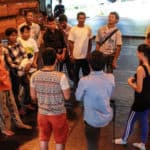 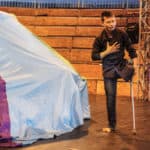