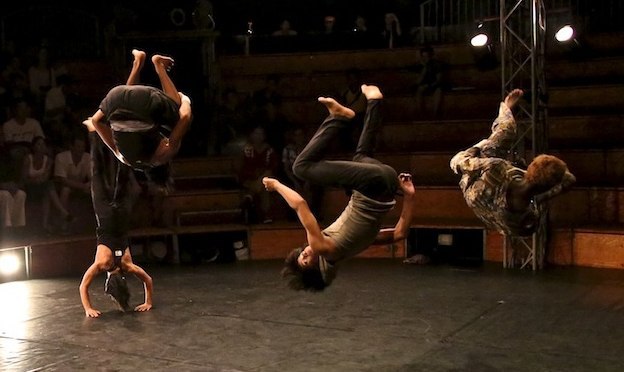 We saw an article in the Siem Reap Post about the Circus, that we thought was interesting. With our upcoming birthday on the 8th February, this review of the past year, from one reader’s point of view, reminded us all of some of the highlights. Hopefully it will remind you of some too.Thanks to Siem Reap Post for their permission to reprint this report.

“It has been brought to our attention that on the 8th of February, Phare, The Cambodian Circus will be one year old in Siem Reap. Of course this is nothing compared to the “mother” school in Battambang – Phare Ponleu Selpak – which will celebrate its 20th anniversary later this year, but never-the-less, it’s a milestone. 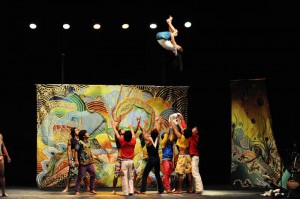 “I’m minded to look back at the year just gone and immediately the huge steps this tiny infant has made come to my mind. And they are huge steps. I wasn’t aware of the circus for the first two months of its life here in Siem Reap. Putho! came and went, so far not to return. It was a daring tale, written by the students from PPS. It’s about violence, love, broken hearts and parent-child relationships. The title means “Oh my God!” but I didn’t see that. Nor did I see the earliest showings of “Eclipse” – but I was privileged to see it many times later, and today, it’s still running.

“The first show I saw was “Tchamleak” (Weird) on April 1st, 2013. it was in the outdoor arena and was advertised with the slogan “It’s foolish not to have fun on April Fool’s Day”. The embryo show was a far cry from its later incarnations. There was almost no makeup, the scenery was primitive, the tricks halting and the cast, fresh on the stage, were hesitant. I remember remarking to friends that the circus wasn’t general entertainment – indeed it was weird!

“From the start, the shows started to get great TripAdvisor Reviews. This was the first review about Tchamlaek “A very creative enterprise with fantastic music. The actors/acrobats are combining classical Khmer music with modern ideas and some truly funny and well-done acrobatics. We had several moments where we laughed out loudly. The kids loved the show and the theme of love and relationship in modern Cambodia was very, very charming. We loved the setting under the open air. ” 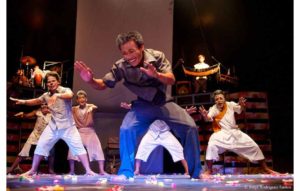 “For me, personally, the story took a new twist. I was fortunate enough to interview Chamroen – the technical director of Tchamlaek. His story told me the great things that the school in Battambang was doing, the help the youth were getting from it and the true value of the project in Siem Reap. The back stories were far more fascinating than any show that I saw… 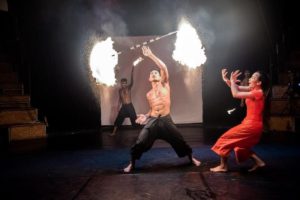 “At the start of May, a new show for me – Eclipse – was unveiled. Set outdoors, complete with fiery skipping rope and amazing acrobatics, this show was as different as chalk from cheese to Tchamlaek. I went along and was immediately converted. Phare was not just a good thing it was a great thing, and I was proud to review it. The amazing “baton” picture, caught by Michel Dvorak became one of our most recognized photos.

“Of course the big news was to come soon. The arrival of the Big Top from France in early May. It took a couple of weeks to get erected, and then finally at the end of May, it opened to the public. At last, relief from the threatening rains and the mosquitoes was here. Tchamlaek moved inside, and the difference from the former production was notable. The addition of makeup, the honing of the artists skills and the clarity that was coming in the story line, showed me the baby circus was turning into a toddler. 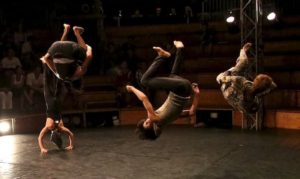 “Next to come back was “The Adventure”. On 23rd June, this production by Generation 5 artists came to town. These artists, far younger and far lighter, were thrown about the stage with youthful zeal. A new show, a new set of highs. However when it came back in September, with a different cast and the addition of subtitles, better plot and stronger action, it too showed it was growing up. 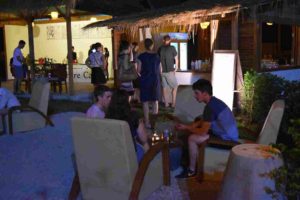 “In July, Phare Café opened adding to the visitor’s experience. Now you could get snacks, and even a full meal before or after the show.

Set menus can be pre-ordered on the Phare web site, or simply enjoy a la carte dining. Phare Cafe can even do group catering for up to 200 guests; cocktails and canape, buffet or sit-down dinner. 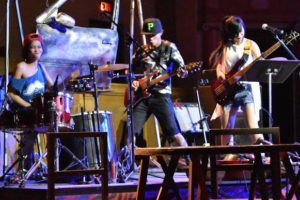 ost the fire on its skipping rope (this filled the tent with too much smoke) but lost none of its pizazz. Then in August, a very special week arrived – Khmer Metal was here for just 8 days. This cutting edge show explored a rock bar in Phnom Penh. With great music, fantastic skills and an adult theme, the only pity was the show was here only for 8 days. The Generation 3 artists showed what maturity and experience can do for the circus, and they brought professionalism and blatant talent with them.

“The 30th September was a sad night. Eclipse was in town for its last night. The cast were going away to rehearse a new show. Yet we packed the big top and sent them off with cheers and a standing ovation. Good luck for the future people!

“The New Adventure came back on the 1st October. With the amazing artist from Guinea – Saliou and other smaller cast changes, new scenery, new tricks, new subtitles, the toddler was becoming a teenager! But what about the show no one had seen before – Chills was promised for later in the month. There were fears about its suitability for a full audience, fears about the performers ability, generally it was just talked about quietly as a second rate show. Enter Gauthier – the new artistic director from Belgium. He worked for four solid days and nights with the cast and transformed this embryo show into a masterpiece. When it opened WOW doesn’t start to describe it.

“The skills are amazing. The range of stunts fantastic. The plot, the casting, everything, a masterpiece. In many people’s opinion, Chills is now the King of the shows and great to behold. 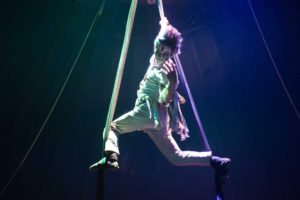 “Halloween came with Chills in town. Of course it did! Chills is a ghost story. Everyone from ticketing to technicians dressed up. There were special decorations and even insects on sale for the hungry visitors to munch! (Maybe!)

“The autumn saw Chills and Adventure alternating. Then at Christmas (again by coincidence with Chills) we had the surprise visit of a rather lost and forlorn looking Santa. Phare doesn’t miss a trick when it comes to making its shows special.

“In January, we welcome back Eclipse. Their new show (Boli Bolli) is ready and waiting, but for now they want to show the old classic. And on the 8th of next month they will celebrate their first birthday. The year has had great moments and great reviews. But the big thing is to look forward to 2014 and the year ahead. At the end of February, Khmer Metal erupts back on the scene, and who knows what will follow …

“I for one am looking forward to the year ahead. Happy Birthday Phare, The Cambodian Circus!”