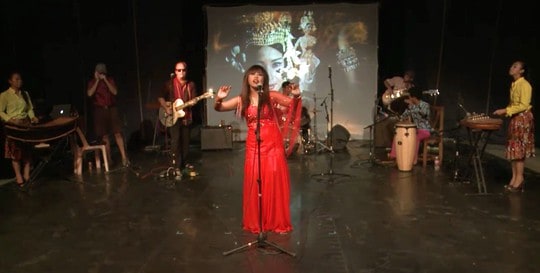 We are re-sharing this post from December 2013 about the launch of “Galaxy Khmer” to honor and pay respects to Ms Channthy Kak, lead singer and “co-pilot” of Cambodian Space Project. Phare is deeply honored to have been part of this collaboration. Channthy was an exceptionally talented artist and a role model.

“Galaxy Khmer”, a flamboyant Rock and Roll spectacle, blazed its way into the Big Top in Siem Reap last Friday and Saturday. In front of an invited audience, Michael Laub directed the show consisting of music from the Cambodian Space Project and three musicians from Phare Ponleu Selpak. They accompanied two classical dancers from the Royal University of fine arts and a “Madison Line” dancer.

A film montage of science fiction-style animation and footage from 1960s Cambodia by German film maker Marc Eberle was projected behind the artists as they performed.

Cambodian Space Project, according to Michael Laub the producer, are “grungy garage Doors meets Cambodian Pop”. They studied the Cambodian Rock and Roll scene from the 1960s and came up with their own interpretation of the music. It’s a re-birth of the music genre, wiped out in the troubled times of the late 1970s. For Galaxy Khmer, they are joined by three musicians from Phare Ponleu Selpak in Battambang.

Laub said that the birth of the extravaganza was a series of fortuitous accidents. Not least was the introduction of a Madison dancer. Laub saw her in Phnom Penh and recognized her skill. On talking to her, he discovered that she had been classically trained. She introduced two other classical dancers to round out the cast.

The show as seen in Siem Reap was a work in progress. The concept is to expand the show to include more dancers, more music and make it into a giant performance. For now though, the piece meets the highly critical eye of Michael Laub, and he has given it his seal of approval for the previews in Siem Reap.

Phare Productions International coordinated the event. The inclusion of musicians from Phare Ponleu Selpak, the parent school in Battambang, was a logical choice. The three talented performers, LY Vanthan, PEOU Pitey and TOUCH Srey, had all been students at PPS for more than ten years years. They are all very excited by the opportunities this project gives them. PPS trains disadvantaged young people in artistic fields, and then through Phare Productions, these highly skilled individuals are offered profitable work and helped to become valuable members of an emerging new society in Cambodia.

Ly said “I’m am used to playing with circus shows in the past. However, this is very exciting as it is a pure music concert and I love playing with the professional musicians. I am looking forward to meeting old friends in Berlin and it will be my first time in Norway.”

The full show will be travelling to Berlin in Germany and Bergen in Norway in January. In these cities, it will be accompanied by one of Laub’s “portrait series” shows, where he carries out interviews with local people, from the ordinary to the notable, and records the results on video. The original concept (and the concept in previous “portraits” was to have live interviews at the showing, but the difficulty of taking the interviewees away from their home villages made the use of video unavoidable. You can partake in the total experience at the Hau Theatre in Berlin from the 16th to 19th January, and in the BIT Teatergarasjen in Bergen from the 23rd to the 24th January.

Concept: Michael Laub/ Remote Control Productions.
Co-production: HAU Hebbel am Ufer, Phare Productions International, BIT Teatergarasjen, Bergen and House on Fire with the support of the Cultural programme of the European Union.
Funded by the Norwegian Ministry of Foreign Affairs and The Norwegian Association for Performing Arts.